Advertisement
The Newspaper for the Future of Miami
Connect with us:
Front Page » Communities » Key Biscayne looks for better way to handle Rickenbacker Causeway 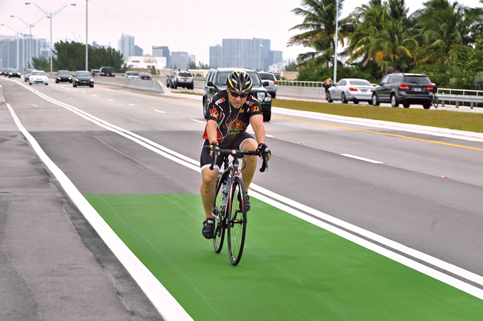 A county-sponsored public meeting will be held to discuss and possibly suggest amendments to the Rickenbacker Causeway request for proposals that Miami-Dade County approved for action in July after Key Biscayne residents and council members last week expressed disapproval and called it “a veiled, obscure process that did not consider the realities of the village.”

At a special village council meeting Sept. 1, county Commissioner Raquel Regalado agreed that the request for proposals (RFP) to address the Z Plan Consortium unsolicited proposal was not the best way to resolve the infrastructure problems of the Rickenbacker Causeway and the Bear Cut Bridge.

“In a perfect world, the county would have saved the funding and would have kept its promises in terms of the infrastructure for the Bear Cut,” Ms. Regalado told the meeting. “That’s not the case. I have yet to see the county produce that funding.”

The same unsolicited proposal to the county that triggered the request for proposals process would privatize not only the Rickenbacker and Bear Cut areas but also the Venetian Causeway linking downtown Miami to Miami Beach, a portion of the plan that the meeting did not focus on but that has drawn its own critics.

The Z Plan Consortium, comprised of Partners Group (USA) Inc., Zyscovich Architects and J Kardys Strategies LLC., would upgrade the bicycle and pedestrian lanes, offer sea level rise resiliency improvements, renovate parks and beaches along the Rickenbacker Causeway, replace the Bear Cut Bridge and make other improvements with the privatization of the causeway, a process residents deemed “a plan designed in secret.”

Fausto Gomez, president of the Key Biscayne Condominium Association and former lobbyist for the Village of Key Biscayne, said “the county should follow an inclusive, participatory, transparent and balanced process.”

He argued that the process, while legal, “has been opaque and has not welcomed the opinions of the affected parties.”

Another resident argued that the RFP that county commissioners approved “severely limits the design decisions that would be made by any competitive bids for this project.”

As to deciding what to do with the unsolicited consortium proposal, Key Biscayne Mayor Michael W. Davey said the village has two options.

“We can move towards an open and public process that includes all stakeholders, to identify the immediate needs and other possible improvements attending to the Bear Cut Bridge and the Rickenbacker Causeway,” he said, “or we can support the continuation of the current associative bid process.”

Commissioner Regalado argued that the county administration possibly waited too long to give notice of the RFP process, but “I think there is a misunderstanding of what happens at the end of this RFP process,” she said. “When there is a determination made on this, it doesn’t automatically mean that we’re going to start building the project. The county will have an internal agreement with the bidder for 18 months and we can let that last or we can cancel it.”

The RFP process has a “cone of silence that prohibits the stakeholders from lobbying you,” she told Mayor Davey. “It does not prohibit your communications with proposers.” According to the Miami-Dade Strategic Procurement Division, the cone of silence is designed to protect the integrity of the bidding process “by shielding it from undue influences prior to the recommendation of contract award.”

Councilmember Luis Lauredo said Key Biscayne residents are responsible taxpayers who produce wealth, and the privatization of the causeway will not be in their best interest.

“Every privatization I have witnessed in my international business career has been not only a failure for the public in a cost point of view but it has been because of lack of the infrastructure,” he said. “The essential infrastructure is there already, and somebody is going to reap the benefit of that investment for their profit motive.”

Councilmember Ignacio Segurola said that Key Biscayne, as the natural caretaker of the causeway, should manage it.

“As the only people who live at the end of the causeway, we have the best interest in maintaining and improving it,” Mr. Segurola said. “It is in our best interest to make sure that the bridges are repaired, improved or replaced because not only our homes but our livelihoods depend on them. We are also the only ones that have the best of interest in making sure that all this is done for a reasonable price, because if you raise the price too much it will be too expensive to come onto Key Biscayne and then our property values and our businesses will suffer.”

Mr. Segurola argued that the village council should ask the county to formally rescind the RFP process and request the transfer of the causeway to Key Biscayne, with appropriate time to come up with a proposal, “so that the causeway can be managed, repaired and improved for generations to come under the guardianship of Key Biscayne, the most vested parties in this entire transaction.”

Councilmember Franklin H. Caplan agreed with Mr. Segurola that turning over the stewardship of this essential infrastructure to a for-profit entity would not be in the best interest of Key Biscayne. “This isn’t a public amenity, it’s not a building, it’s not a park,” he said. “The consequences of getting a wrong design or implementation are dire.”

“I don’t really understand the bid; I think it might be [economically] backwards” said Councilmember Brett G. Moss. “$12 million revenue coming in and $4 million for operating expenses; that leaves about $8 million in net revenue. Our borrowing power is only about $55 million, and this is a project that is close to $400 million to $500 million, so it seems to me that the most critical piece for this to be successful is giving some type of grant. The RFP states that [Miami-Dade is] working on a grant, but it seems that securing the grant first would be the proper way to do it and then go to a bid or do it in a public process bid.”