Advertisement
The Newspaper for the Future of Miami
Connect with us:
Front Page » Opinion » Don’t use public land as chips in closed-door poker games

Notice how many big deals today involve private operators taking over public assets as profit centers for up to 99 years via closed-door negotiations. Public assets are a sacred trust of government; dealings should be public, careful and infrequent.

Governments have long dealt away assets. What is new today is that an unsolicited bid for Miami-Dade County properties triggers a request for proposals that often leads to the bidder landing public assets in what looks like a giveaway.

As big land holdings in Miami-Dade disappear and prices soar, so does the value of public assets and the temptation of businesses to make unsolicited offers that put these assets into play.

These are properties that government never meant to sell or lease, but after a private offer, most often it does. A bid system meant to protect public assets becomes a means to convey them to someone else who will control them, decide how to use them, and raise user fees to the public.

Governments here are often poor stewards of their lands and buildings, a reason that this newspaper has urged creation of a public trust to protect assets that belong to all residents, not to mayors and commissioners who often deal them away with very mixed results.

Public-private deals involving public assets can be worthwhile. But elected officials too often think short term, solving budgetary problems by plugging holes with too little payback from valuable assets that should have stayed under public control. Elected officials seem to think a “long term” asset is for the time period until they are term-limited out of office rather than decades ahead. 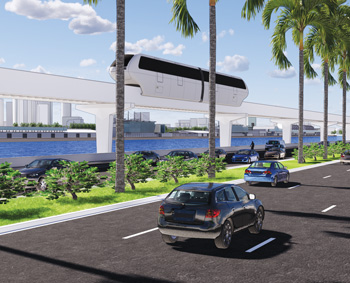 The county-owned MacArthur Causeway would provide land for a planned monorail.

Look at eight deals for county land and assets detailed in Miami Today just last week and this. It’s a long list but hardly complete for past and future deals that would hand control of the taxpayers’ assets to someone who will profit handsomely using them. They are:

■A deal would hand two county causeways and multiple bridges to a consortium that made a sketchy unsolicited offer. The nature of the control is vague but allows private enterprises and buildings on public land and the setting and collection of tolls beyond government control. Details of the deals for the Venetian and Rickenbacker Causeways remain hidden.

■Another consortium deal, again unsolicited, would provide multiple transit modes linking Miami and Miami Beach, the star attraction being a monorail over a third county causeway, the MacArthur, with the consortium controlling and operating the rail line and setting its own fares.

■Another county deal is tied to the monorail because the Miami terminal for the rail is to sit beside a county bus depot over which the big-name player in the monorail deal, Malaysian casino giant Genting, already has approval to build and run a hotel. Though that deal is years old, nothing has happened as Genting seeks approval for a casino surrounding the bus and future monorail depots. Meanwhile, the county has lost control of its land.

■Over and around another bus depot on the west side of the county, another offering would see a developer build almost 2,000 apartments, a hotel, retail and office space on 44 acres of county-owned land in work due to end in 2030.

■At Miami International Airport, the county initiated a process to seek a new hotel, with three companies in separate negotiations for the airport land and project.

■At Zoo Miami, Miami Wilds water park plans to lease of 27.5 acres of county land. The developer would take over the acres used for zoo parking and charge for the privilege. This deal for up to 80 years was also sought by the county.

■A luxury auto track, hotel and commercial development planned on 160 county-owned acres near Miami Gardens are in a design and permitting process. After several delays, developers say they are pressing ahead.

■The eighth development on county land is a rarity, a nonprofit Underline linear park that will run about 10 miles under the Metrorail from the Miami River to Dadeland. Unlike most deals, this one is virtually certain to profit the public by enhancing underused land and making it a valuable park. Also uniquely, this one was hashed out in public meetings with no secrecy to keep the public out.

In these land dealings, the public has only one shot at getting it right. Make a mistake and the people will suffer for generations.

For example, the county sold out the public to almost $3 billion debt in the Marlins Stadium deal in 2009. But few note that the flawed contract also handed the Marlins control of nearby lands, prohibiting use for soccer without team approval. That barred professional soccer owners from the area, so they went after a City of Miami asset, its only golf course, as a development site around a soccer stadium. One bad deal begets another.

A public-private deal might well aid the community. But making it without citizen oversight makes that unlikely. Some of these eight deals are far down the road. Others still aren’t too late for oversight – if government will do it.

The public should keep the pressure on governments not to deal away assets privately and then unveil the deal at the last second. And all elected officials should insist on knowing details long before they might face a public vote. Commissioners who OK’d the Marlins Stadium later said they didn’t have all the facts when they voted. They missed their only shot at protecting the assets for which they serve as custodians.

This is not academic. The county may face a deal for its old courthouse after it is repaired and courts move to a new building next door. Just because the county is offered a lot of money doesn’t mean it must hand over a historic building that could still have value.

In the same vein, why should Miami yield its only golf course for far less than its long-term value? Remember, green space has a value far more than its value in a sale or lease. The public deserves deal details well before any action – though if the pattern holds, it will get only minimal facts on a contract until days before a commission vote.

The county should scrutinize rules meant to expand competition in public asset deals that seemingly force it to seek bids for projects it never really wanted. These are long-term assets, not short-terms chips to play in a public-private poker game where the taxpayers often lose their shirts.

Key Biscayne councilmember Luis Lauredo said last week at a meeting about the planned private takeover of the causeway and bridges leading to the village, “The essential infrastructure is there already, and somebody is going to reap the benefit of that investment for their profit motive.” Added councilmember Franklin Caplan, “The consequences of getting a wrong design or implementation are dire.”

The stakes are indeed high in all of these public-private deals. They should be well-thought-out rarities, not a weekly poker game.