Advertisement
The Newspaper for the Future of Miami
Connect with us:
Front Page » Business & Finance » Work to begin on luxury auto track Drivers Club Miami 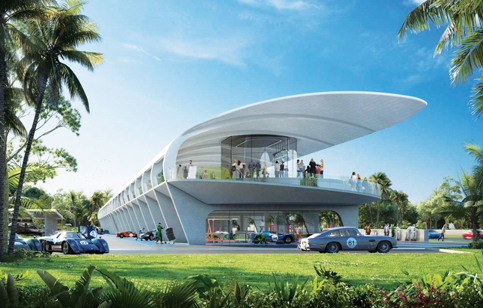 A luxury auto track and commercial development planned near Miami Gardens is scheduled to begin construction in November after a delay in early phases pushed the completion date back almost two years.

Drivers Club Miami, a more than $100 million project being developed by 13 Pista LLC, would include a two-mile private driving track, club, hotel, retail, dining and cultural attractions upon completion by early 2029. The project is based at a 160-acre county-owned site at 20000 NW 47th Ave. that previously housed the Landmark Learning Center.

At the moment, 13 Pista is going through the design and the permitting process, Attorney Eric Singer of Bilzen Sumberg, the firm representing 13 Pista, an affiliate of South American developer Carlos de Narváez, confirmed to Miami Today.

As the newspaper reported last year, the development ran behind schedule since three non-profit agencies located on the southern part of the Landmark site depend on the utilities that run north to south on the property.

13 Pista initially planned that construction could begin at the northern part, without having to move the agencies first. But as water and electricity would have been cut off to the agencies, the company and the county amended the lease last year to include a new schedule with a relocation of the non-profits and the construction of a government center before the auto track development, as part of “phase zero,” Mr. Singer explained.

The agencies are to be relocated a mile east of the Landmark property on vacant land owned by the Young Women’s Christian Association of Greater Miami-Dade (YWCA) in a building to be renewed and in new facilities to be built by 13 Pista. A government center building would be located at Northwest 199th Street and 47th Avenue on the Landmark property.

At that point, construction is to begin on the vacated portion of the Landmark site where the Drivers Club would be located. Phase I includes construction of a two-mile private driving course and public bicycle track; an integrated Pit Lane Clubhouse with member facilities, lounges and other leisure space totaling 28,000 square feet; vehicle maintenance and inspection facilities totaling 72,000 square feet; paddock shelters and washrooms totaling 13,000 square feet; roughly 12,000 square feet of public retail and restaurant space with views of the course; and storage facilities for at least 50 vehicles.

The original budget for the project was estimated to be $100 million including the Drivers Club, the government center and the renewal and construction of new facilities for the non-profits, but now 13 Pista has a total cost higher than that amount, Mr. Singer said.

“When the project was originally envisioned about five years ago, it was much more focused on old-school car technology. The market is now more focused in newer technologies, and as a result some of the facilities to support the newest cars would have more technology and will be more expensive,” Mr. Singer explained. Also, construction costs have increased in the past months. Mr. Singer said he could not be precise about how much project costs rose.

Back in 2017, the Beacon Council applied for economic development incentives under the county’s Targeted Jobs Incentive Fund program on behalf of 13 Pista LLC. If the company complied with the targets outlined in the initial lease, it could receive financial incentives for the project.

But since there was a delay at the initial phase of development, 13 Pista did not apply for the fiscal year 2021-2022 incentive of $240,833, James Kohnstamm, executive vice president for Economic Development at the Beacon Council, told Miami Today.

“l can confirm that there has not been a payment this year from the county and there was not a request for payment from the company, and that is because there have been a couple delays in the project,” Mr. Kohnstamm said.

The project is moving forward and the company has five more years of the program allowable through the county’s resolution, and the company still has the opportunity to show the county proof that it has met requirements. “The county then determines if that’s correct and then they can receive those funds,” Mr. Kohnstamm said.

Negotiating the lease with Miami-Dade County took longer than anticipated, Mr. Singer explained. “When the incentive was negotiated, the thought was that the lease and the incentive would be approved at about the same time, but the lease was not signed until August 2018,” he said. As a consequence, more than a year passed between the incentive and the lease when the project actually started to move forward, and the deadlines at the initial phase no longer worked to apply for the county monies.

Miami Drivers Club is estimated to create 240 full-time jobs, according to Stanley Rigaud, vice president of international economic development at the Beacon Council and leader of the Small Business Program. “We did ask if the delays created an environment where they [13 Pista] would need to adjust the total job count,” he said, “and their response was no, they’re still on track to hire the 240 jobs that they had originally forecast.”