Advertisement
The Newspaper for the Future of Miami
Connect with us:
Front Page » Top Stories » Upland Park plans for nearly 2,000 units at county transit hub 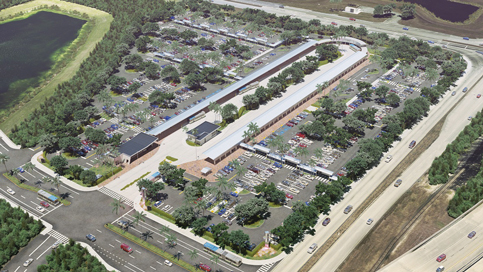 A 44-acre development near and over the county’s Dolphin Station is set to begin construction of its first phase on county-owned land in February 2022, according to documents delivered by an affiliate of developer Terra Group to the county’s Internal Services Department. Plans include an amendment to Chapter 33 of the county’s code and a new zoning district.

Upland Park, a project with 1,943 residential units, a hotel, retail space, and general office space, is set to begin construction by 2022 and is estimated to be finished by the second quarter of 2030.

The schedule consists of three phases, Phase I (2021-2024), Phase II (2024-2027) and Phase III (2027-2030). Each has a timeline for the lease agreements, design, site work, construction, certificates of occupancy and permits. The lease closing with the county is scheduled for February 2022, just before the construction of Phase I is to begin.

When the county commission agreed to early terms of the project in June, County Chief Operations Officer Jimmy Morales said there would be 1,700 apartments. Lobbyist Brian May, speaking for Terra, cited 1,837. The subsequent RFP document from Terra lists 1,943.

In June, commissioners approved a 97-year contract with the Miami firm for construction of Upland Park, located where the Dolphin Expressway and Florida Turnpike intersect in the unincorporated Beacon Lakes area.

No public funding is required for the project and the 97-year agreement is expected to generate estimated total rental income of $1.17 billion for the county, according to a memo from Mr. Morales. Also, the developer is to invest $20 million to improve and maintain Dolphin Station. New county real estate taxes generated by the project are estimated to be over $3 billion.

The development is laid out in two districts. The southern district benefits from adjacency to the Dolphin Park-and-Ride Station that connects west Miami-Dade County with Miami’s Intermodal Center (MIC) and Downtown Miami.

Access to residential, commercial, and civic amenities is to be provided on two levels: on the ground level, where retail frontages will face the bus bays; and an upper level with an elevated plaza to become the project’s signature commercial destination, according to the plans. “It offers commuters, residents and patrons a space to enjoy the outdoors lined with retail frontages, cafes, and other amenities,” say the RFP document from Terra.

Terra Group is to submit design and construction packages to the Small Business Development unit of the Internal Services Department prior to advertisement and award of subcontracting agreements, and the department would review and determine the appropriate small business program measures, Mr. Webster wrote.

“Upland Park will enhance mobility and support multimodal modes of transportation while offering a viable commute alternative for potential transit riders from surrounding residential areas of West Miami-Dade to major employment areas such as Miami International Airport, the Health District, Downtown and Brickell,” said a press statement from Terra to Miami Today for this article. “The development will generate thousands of jobs and will also create new rent and tax revenue for Miami-Dade County on land that is producing zero profits currently.”

Terra plans to apply for an amendment to the county code to implement the “Mixed Use Development,” according to the RFP document submitted to the Internal Services Department, and also apply for a district boundary change. Details of the changes sought were not specified in documents submitted.

“Our team intends to pursue such new zoning district either through the formal application process of Section 33-315, working with the county’s professional staff, or working with one or more county commissioners to sponsor an ordinance to amend the code,” RFP documents state.

A traffic study to evaluate the impact of the project, a topic of discussion at the June 15 commission meeting, was scheduled in Terra documents to begin June 17 and to end by Nov. 5.

Commission Chairman Jose “Pepe” Diaz, who sponsored the deal, said at the June commission meeting that a traffic study will be done before Terra gets the lease for the property and shovels enter the ground, saying “I would not allow any project of that magnitude without the proper streets widening to be done.”