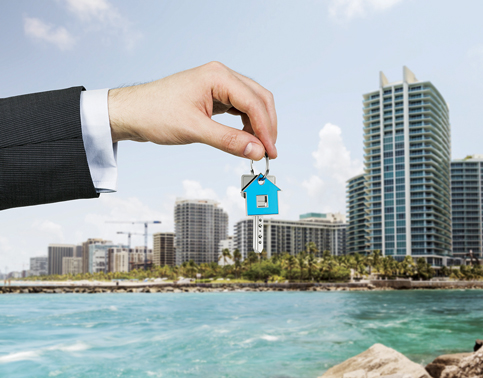 The multi-family apartment rental market is currently facing a shortage in Miami-Dade, with less than a month’s worth of inventory, according to local residential real estate experts.

There’s about a month of inventory in rentals, which are historical lows, according to Christina Pappas, vice president of the Keyes Co. Anything below six months of inventory is a landlord’s market.

“We only have seven-tenths of a month worth of inventory and if no additional listings are being added by day 20, we would have nothing else to rent out,” she said. “Average median days on the market for apartment rentals is down to about 22 days now.”

For multi-family units under two-bedrooms units, the average rent price for the past three months in Brickell and Coral Gables area was about $2,400. If priced correctly, units are lasting on the market for a maximum of 11 days, Ms. Pappas said. “Now, it’s typical to see a property come on the market and move within one day with multiple offers, sight unseen,” she added.

“We’re also starting to see what we call aspirational pricing. So, for instance, a median listing might be priced at $2,500, but it would get rented at about $1,800. It’s showing me that the landlords are seeing what’s occurring and they’re seeing the amount of demand, so they are pricing their property a little aspirationally, hoping to get something higher,” Ms. Pappas said. “What’s interesting now is that this past three months. the median list price has been $3,900 and the median renting is $2,000.”

“Our average occupancy used to be about 95% in a multifamily building, which is considered a stabilized, healthy occupancy for properties in Miami,” he said. “Now, 97.88% is really more of the average, so everything is a lot fuller, and with that comes leveraging the availability with rates that are still up there, and concessions are pretty much nonexistent or minimal.”

About 55% of those who are renting, are coming from outside of Miami-Dade County and Florida, Mr. De La Espriella said, “which is also significantly helping with rent growth and occupancy.”

“Many of their employees are moving into Brickell and Coral Gables area, which is really driving the markets,” she said. “That’s going to continue to grow and compete with the locals. We hope that this brings higher pay to the area as well and see the payment gap between out-of-town employees and the locals close a bit.”