Advertisement
The Newspaper for the Future of Miami
Connect with us:
Front Page » Real Estate » Vital Dade County Courthouse repairs won’t be done until 2023 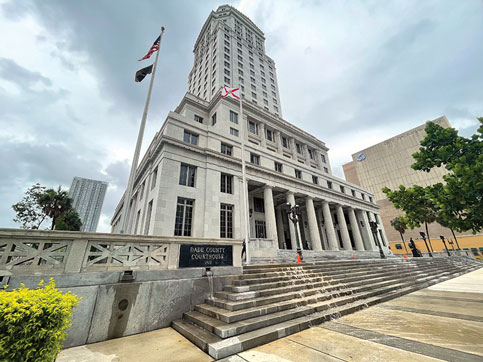 At least a dozen companies are interested in repairing the basement of the now-evacuated Dade County Courthouse as part of county maintenance. The estimated value of the repair is almost $4 million and work is expected to be substantially complete within 525 days after a notice to proceed is issued.

The pre-bid and site visit to the courthouse basement took place Aug. 13. Officials from the county’s Procurement Management Department held the meeting and explained to those interested in the bid the project’s details and deadlines. Then, officials took the company’s representatives to the basement so that they could tour the site where the company awarded for the contract will be working.

The deadline to receive bids is 2 p.m. Sept. 7, 2021. A permit for the job is already active, so when the awarded company is selected, only a change of contractor would be needed.

Given the bid deadline, basement completion would not be due until mid-February 2023 or later, depending on when a contract is actually awarded. Meanwhile, building employees work remotely. A replacement courthouse rising next door to replace the outmoded building is now expected to open in 2024 – the county and the developer are still negotiating an exact deadline.

The scope of repairs to the old courthouse includes the concrete restoration and steel rehabilitation of the 140-plus columns in the basement, placement of a new floor slab, and installation of a new waterproofing membrane system over the existing basement, according to information provided at the meeting and the Procurement Management webpage of the county.

The contractor would have to repair, reinforce and protect the existing steel columns, “place temporary shoring, phase all of the construction, fire alarm, fire protection, drainage, plumbing work and have dewatering onsite,” the website reads.

The 28-story building was closed in July until repairs are completed. The move came after the collapse of Champlain Towers in Surfside raised concern about the safety of old buildings such as the old courthouse, built between 1925 and 1928.

A visual inspection performed in June by U.S. Structures Inc., a General Contracting and Structural Engineering firm, reported that the majority of the concrete column encasements have varying degrees of concrete spalling and cracks, ranging from minor to severe.

“Numerous embedded steel column members have varying signs of corrosion,” the report said. “As previously reported and documented, concrete spalling and cracks are present in some of the overhead beams and slabs.”

A second report done by EXP U.S. Services Inc. in July had similar findings. The engineering company report said that during rainy days water leaked through the floor slab at the locations of several columns. Also, they found longitudinal cracks along the beams and on the existing columns’ concrete encasement.

“At a few locations, the existing columns had been repaired; however, cracks were reappearing in the repaired concrete encasement,” the report says.

The basement of the building had the 40-Year Structural Re-certification report dated May 5, 2015, and the 2021 report of EXP found that 14 columns summarized in that report were “visibly in good condition after the repairs.”

Nonetheless, “they were showing hairline cracking on the concrete encasement… there was also evidence of water leaking through the column and floor slab joint.” Additionally, several columns “that were identified with delamination of concrete and significant amount of the steel member exposed where, due to corrosion, section loss occurred,” the EXP report says.

The conclusions of the EXP report notes that the columns at the basement level on the northwest and southwest quadrants “are operating in reduced capacity.” The engineering company recommended that “heavy loadings not be placed at these locations.” Also, it was recommended that the third floor library book storage be unloaded until the basement columns are repaired.