Advertisement
The Newspaper for the Future of Miami
Connect with us:
Front Page » Opinion » 100 years after the land boom began, what’s coming next?

100 years after the land boom began, what’s coming next?

Exactly 100 years ago this month the great Florida real estate boom took off, ushering in our unofficial state bird, the construction crane, which still thrives in flocks in Miami.

Real estate had already been Miami’s economic engine before the 1920s land boom was the shot heard around the world. Despite Miami’s current global links in trade and finance, world fame as a visitor hub, and now perhaps a new star of technology, since very early days real estate has been our signature enterprise.

“Probably less than 10% of the people in Florida, on the November day I write these lines, did not come to buy land either for their own use or for speculative purposes,” Charles Donald Fox wrote in his 1925 book “The Truth About Florida.”

“At least 90% of the people now in Florida are intent on land speculation, and they are purchasing Florida property for the sole purpose of reselling it at a profit,” he wrote. “Land that has an immediate resale value – land which will produce an overnight profit – that is what the mob is eagerly seeking.”

That land and the structures now on it underpin almost every Miami enterprise. Certainly they bring vast sums into the community and set spending in motion.

Greater Miami as a realty market was first built on hyperbole in the style of Mr. Fox. The early real estate hucksters overstated the area’s virtues devoid of a single provable fact. 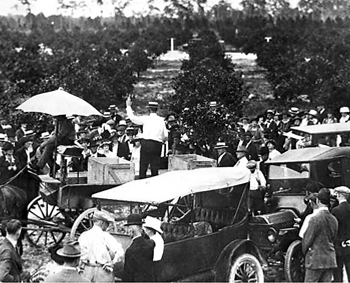 Doc Dammers auctions property in Coral Gables from the back of a horse-drawn wagon.

Take the selling of Coral Gables, which began in November 1921. As author Christopher Knowlton describes it in his current book “Bubble in the Sun,” chief salesman Edward “Doc” Dammers, who later became the Gables’ first mayor, would begin his pitch, this way: “What is it, I ask you, that makes our citizens different? Women more beautiful, men more dashing, enterprise more daring, while the song of the bird, the color of the flower, the smile of the little children are all aglow and have to them a charm, a divine thrill unmatched the world around.”

Hard to prove that – or to disprove it.

Compare that with a 108-page, statistic-filled report released last week by Berkshire Hathaway HomeServices/EWM Realty that has the same real estate sales aim as Doc Dammers. But President Ron Shuffield, also based in Coral Gables, takes a far more moderate tone in discussing what he also sees as lasting real estate values:

“As we enter the third quarter of the year, there is no doubt that South Florida’s residential real estate market… is on fire. That said, we do see some signs of ‘market stabilization,’ which is good news for a market that has set historical sales records over these past 12 months….

“…even when compared to a more stable market, we are still experiencing one of the most robust residential real estate markets in the history of our South Florida market. The triple-digit percentage increases in the number of sales for most every price range, with the exception of single-family home prices under $500,000, are jolting to any sense of our reporting in prior years.

“…We believe the stabilization process has begun and that it will by no means be a stark fall, but a soft return to a more balanced market….

“As we slowly move past the pandemic, the return to normalcy will continue to bolster our market for many reasons – including the fact that a seemingly higher percentage of today’s buyers are using their newly purchased home as their primary residence. Having more full-time residents will encourage more economic activity across all business sectors….

“One of the most compelling factors of our growth over the past year is the fact that it has occurred in spite of a dramatic drop in the number of our international visitors, who have been the mainstay of our residential real estate market since the mid-1970s. Once they return to pre-pandemic levels, we’ll see the further absorption of existing and new-to-be-built condominiums.

“We don’t see any let-up in the popularity and appeal of Florida as a whole, specifically the South Florida market.”

It is indeed hard to see any let-up in appeal of this market. Doc Dammers and the others who sold this community 100 years ago also saw no let-up. But Mother Nature can always become a factor.

Miami properties were at their hottest on Sept. 17, 1926, when an unexpected hurricane hit. As Mr. Knowlton writes, the headline the next day in the far-away Paris Herald Tribune read: “South Florida Wiped Out by Hurricane. Where Miami Beach Was Is Now a Sandy Waste.” Hyperbole that matched that of Doc Dammers, for sure, because the damage report was overblown, but the hurricane did cause such a real estate storm that prices in downtown Miami didn’t return to their 1926 heights until the 1950s.

Nature can cut two ways, of course. The disaster of Covid-19 helped fuel the past year’s South Florida real estate buying frenzy as Northeasterners (and others) confined indoors for safety fled to newly purchased Miami residences to ride out the pandemic in outdoor comfort.

On the other hand, some people fear that sea level rise will encroach within their lifetimes on South Florida, affecting the buying climate.

Other than nature’s climate, consider the political climate. Could decisions by Florida and Miami-Dade governments make this community even more attractive to new residents – or less attractive? The Berkshire Hathaway report shows 661 people moving to no-income-tax Florida every day while residents exit states with high taxes. What if Florida also got an income tax?

There’s absolutely no hint of that, but neither was there a hint of the 1926 hurricane. And Florida has an old saying: Nothing is safe when the Legislature is in session.

You know the long-term result of our land boom: Mr. Shuffield’s message is a good summary. Everything came up far rosier than those flowers Doc Dammers was hawking. Even during the pandemic, the construction crane still flies high.

It’s always well to remember the dictum of another sales group, the stock brokers: “Past performance is no guarantee of future results.” Still, for the past 100 years the trend line of Miami real estate has been on the up and up and up. Long term, I wouldn’t bet against it.