Advertisement
The Newspaper for the Future of Miami
Connect with us:
Front Page » Top Stories » Lane closures, traffic shift coming in I-395 mega-change 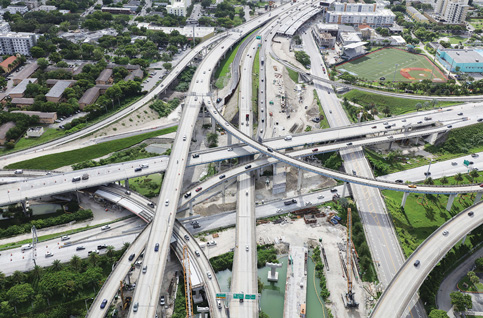 Two major lane closures and a traffic shift are planned soon as construction moves ahead on the expansive I-395/SR 836/I-95 Design-Build Project in Miami.

The work by the Florida Department of Transportation (FDOT) is a partnership with the Miami-Dade Expressway Authority and its contractor, the Archer Western – de Moya Group Joint Venture.

The massive project includes a “Signature Bridge” over Northeast Second Avenue and Biscayne Boulevard, an upper deck of traffic built over SR 836 and the Miami River, and the addition of one lane to the northbound entrance to I-95.

On July 25, the contractor poured the Signature Bridge center pier footer located between Biscayne Boulevard and Northeast Second Avenue just north of I-395.

The operation involved 520 trucks delivering concrete around the clock from midnight Friday, July 23 until the operation was completed on Sunday morning, July 25.

The contractor is also working on the footers for four of the six arches being constructed during this phase of construction, and erection of the arch segments is expected to begin in late 2021 or early 2022.

Further to the west, the contractor is working on a westbound I-395 bypass bridge and roadway between Northeast First and North Miami avenues that is expected to open in October 2022 and will allow westbound I-395 traffic to be diverted onto the new bridges.

“The opening of the bypass will allow the contractor to begin removing existing I-395 westbound bridges to open new construction work zones. The contractor is erecting bridge segments adjacent to the Florida East Coast/Brightline tracks and adjacent to NW 1 Court, just south of I-395. Foundation construction is also occurring in the areas east and west of NW 3 Avenue and north of NW 14 Street,” wrote Mr. Gonzalez.

In the next few weeks, the contractor is expected to close the westbound I-395 single lane ramp to northbound I-95 in order to construct the new permanent two-lane ramp. A temporary single-lane ramp will be opened on the left side of the roadway to allow westbound I-395 drivers to connect with northbound I-95. The new permanent ramp is expected to be opened to traffic in about 16 months.

Mr. Gonzalez said another upcoming traffic shift along the I-395 corridor calls for closing the North Bayshore Drive ramp to eastbound MacArthur Causeway.

The ramp closure, expected in late August or early September, will allow the contractor to continue constructing two arches adjacent to the ramp as well as a new permanent ramp.

A left turn lane will be provided on southbound Biscayne Boulevard at Northwest 11th Terrace to allow drivers to access the eastbound MacArthur Causeway next to the Frost and Pérez Art Museum Miami museums. Information on these changes is at: www.I-395miami.com

Construction of the new second level of SR 836 continues day and night. The contractor has completed five piers west of Northwest 17th Avenue and is working on foundations and piers from Northwest 17th to Northwest 12th avenues.

“The project team recently took delivery of a specialized CAP/Beam Launcher that was specially designed to erect the bridge caps and beams that will be used to construct the second level roadway,” said Mr. Gonzalez.

He said the contractor is now assembling the launcher in the SR 836 median construction zone between the toll gantry and Northwest 17th Avenue.

The contractor is expected to begin using a section of the launcher referred to as the main support beam to erect the caps onto the completed piers west of Northwest 17th Avenue in late August.

Widening of the eastbound SR 836 ramp to northbound I-95 continues with the contractor pouring the concrete driving surface at the west end of the ramp and erecting concrete beams on the east end at the approach to the ramp. The ramp is being widened from one lane to two and is expected to open to traffic by year’s end.

Over 90% of the concrete pavement replacement has been completed on I-95 from Northwest Eighth to Northwest 29th streets.

The contractor continues widening the ramp lanes that connect westbound I-395 and eastbound SR 836 to northbound I-95 over Northwest 17th Street.

Most work is at night due to the lane closures required. In addition to the concrete pavement, the contractor is replacing bridge approach slabs, installing new guardrails and Intelligent Transportation devices.

The entire project is expected to be done in fall 2024.