Advertisement
The Newspaper for the Future of Miami
Connect with us:
Front Page » Education » Historians make history at Miami’s 125th birthday extravaganza 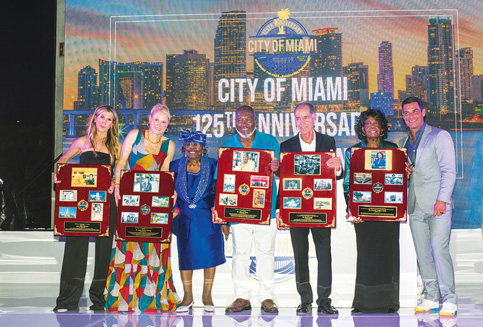 The City of Miami 125th Anniversary Celebration at the Pérez Art Museum Miami honored five historians who not only preserved Miami’s history but also made it clear that the city’s future is just as important as its past.

The birthday celebration included not only the honorees’ recognition and speeches, but also music, cuisine and dancing that represented the diversity of the city.

“This is a celebration of 125 years of creating what I think is the most diverse and dynamic city in the world,” Mayor Francis Suarez said at the event July 28, the date the city was incorporated 125 years earlier. “Tonight is a celebration of not only the city’s history, but also what’s coming and what is to come.”

The “Lifetime Achievement Award” was presented given to Drs. Dorothy Jenkins Fields, Paul S. George, Enid Curtis Pinkney, Marvin Dunn and the late Arva Moore Parks McCabe. Plaques represented what each had done for the history of the city, and also were a symbolic passing of the torch to the next generation of leaders.

“These honorees are legends of history who have stood on the shoulders of those who came before them, but now it’s our turn to stand on their shoulders and learn from them,” said Larry Gautier, co-chair of the 125th City of Miami Anniversary, whose family was one of the first families in Miami in the late 1890s.

“Recognizing Miami’s history provides a foundation for Miami’s new city,” Dr. Fields told the crowd assembled for the celebration. “The past must not be forgotten. Pioneers such as Julia Tuttle, Henry Flagler, the Brickells, as well as Black laborers, the Bahamians, Blacks from the southern states and elsewhere cannot be forgotten.” The celebration continued as the Black Archives Historic Lyric Theater in Overtown hosted 125th birthday events last weekend.

Dr. George, a native Miamian, serves as Resident Historian at HistoryMiami Museum and is also an author and former professor at Miami Dade College. “I partook in the centennial 25 years ago and at the time thought there will never be any celebration like that again,” Dr. George said. “But 25 years later, despite the pandemic and other challenges, I’m just delighted to be a part of a celebration that isn’t just one day. This is going to be a celebration for weeks to come. As a boy who grew up in Miami, it is a thrill for me to see where this community has gone and how it has changed. It’s unbelievable. It’s ever changing.”

Dr. Dunn was recognized as an honoree after his years of work at Florida International University beginning the Institute on Sexism and Racism in the 1970s. In 1981 he founded a school, the Academy of Community Education, for youth at risk of becoming dropouts. His book “Black Miami in the Twentieth Century” was published in 1997. He has been on national television talking about Black history on NBC, CBS, ABC, Good Morning America and Black Entertainment Television. “We have to reserve history but remember that you make history. Your actions and what you give creates history,” Dr. Dunn said with his Lifetime Achievement Award on stage with a Biscayne Bay background.

“After all the battles I’ve fought with the city, I’m surprised you want to give me this award,” Dr. Pinkney said jokingly. She was born in Miami and is of Bahamian heritage. One of the battles she picked, she said, was preserving the Miami Circle at the mouth of the Miami River when the city wanted to get tax revenue from it by turning it into a parking lot instead.

“The circle was my first battle,” Dr. Pinkney said. “The next was rescuing Lemon City Cemetery, and then making sure that the Black pioneers buried in the Miami City Cemetery were recognized on the historic television show, not just the white pioneers. I treasure this honor to the bottom of my heart and am so impressed with the city of Miami today.”

The daughter of Arva Moore Parks McCabe, Carey Parks, accepted the award in her mother’s honor. “She would’ve been so happy. She would love this.” Ms. Parks McCabe ran the Coral Gables Museum, is in the Florida Women’s Hall of Fame and wrote multiple Miami history books including “Miami the Magic City.”

“We have the magical name, ‘Miami,’ that everyone recognizes, no matter where you are,” city Commissioner Joe Carollo said. It is considered one of the few cities that, not only in the US but internationally, was founded by women, Mr. Carollo said. This was met with cheers from the crowd after Julia Tuttle and Mary Brickell were brought to their attention.

“This is a city of open doors. Doors are open for freedom and opportunity. It’s a city of potential. And while 125 sounds old, most other major cities in the US are much older,” Mr. Carollo said. New York City is 397 years old and Los Angeles is 239. “Look how much we have accomplished in just 125 years. And there is so much more to come.”

The evening’s celebration was at Pérez Art Museum Miami, which began as the Miami Art Museum in 1984 and evolved into the Perez Art Museum in 2013 with Jorge M. Perez’s gift helping to put the museum in 200,000 square feet on Biscayne Bay. It is a home to international and contemporary art from the 20th and 21st centuries.

The celebration of 125 years of the city’s history and potential would not have been complete without an offbeat singing of “Happy Birthday, City of Miami.”