Advertisement
The Newspaper for the Future of Miami
Connect with us:
Front Page » Top Stories » Wynwood OKs unique public-private deal 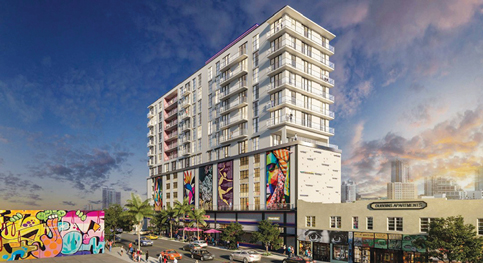 A unique public-private partnership has assembled and will bring an apartment building to Wynwood’s southeastern corner devoted entirely to affordable rental units, atop ground floor retail.

Wynwood Works is proposed by Wynwood Works LLC, an affiliate of Magellan Housing, the developer selected by the Omni Community Redevelopment Agency (CRA) to redevelop the property at 2035, 2037 and 2043 N Miami Ave.

The project was approved Monday by the Wynwood Design Review Committee with conditions on a 3-to-2 vote.
The site is in the Wynwood Neighborhood Revitalization District (NRD-1), and within the CRA’s boundary.

Wynwood Works is designed as a 12-story multi-family residential attainable housing project, including 120 units ranging from studios to two bedrooms.

The development will total 179,105 square feet of floor space, and offer 5,698 square feet of ground floor commercial space on North Miami Avenue, with five levels of on-site enclosed parking for about 108 vehicles, and a mix of amenity spaces to support the residents.

Project attorney Steven J. Wernick said the project is participating in the Wynwood Attainable Mixed Income Program, recently established within the NRD-1, with 20% of the units to go to households at or below 50% Area Median Income (AMI), including 10% to Extremely Low Income (ELI) households (at or below 30% AMI).

Mr. Wernick said the project has been submitted and reviewed by the City of Miami Planning Department and Office of Zoning.

Wynwood Works is a key project for the Omni CRA and Wynwood NRD, areas experiencing revitalization and in need of housing for those of modest income increasingly being priced out of Miami’s urban neighborhoods, Mr. Wernick wrote to the city.

The lot is irregular shaped with 25,628 square feet, with a single thoroughfare frontage on North Miami Avenue. With required right-of-way dedications, the net lot area is 17,946 square feet.

Mr. Wernick wrote, “The property has a unique lot configuration, shaped by its location in proximity to the FEC Rail Line, which forms the rear yard of the property running southwest towards the intersection of North Miami Avenue and NE 20th Street.”

He said Omni CRA acquired the property, former site of the Lowenstein galleries, in 2018 to redevelop it with the CRA’s objectives.

The property has two small warehouses, which have been unoccupied for several years, and an overgrown gated parking lot. To the north is a parking lot and FPL transformer lines. To the west is North Miami Avenue, and a part of Wynwood that has remained industrial and seen little redevelopment since the NRD-1 was adopted in 2015.

Mr. Wernick wrote, “The project will be one of the first affordable housing new developments in Wynwood in many years, at a critical time when housing costs have continued to rise, making it increasingly challenging for retaining Miami’s workforce, artists, and others essential for the continued revitalization and growth of areas like Wynwood, Omni and Edgewater.”

Jennifer McConney-Gayoso, principal at Studio MC+G Architecture, detailed for the committee the specifics of the proposed façades and the materials to be used. She also explained areas where artwork will be installed, including unique shadow art on the south side of the building, and a catwalk on the second floor.

The site at one end is limited to about 50 feet. “It was a difficult site to develop. We squeezed the envelope on this project,” she told the committee.

Even with the tight site, the plan shows 14% open space, more than the 10% zoning code requires.

“It’s surprising you can actually do that in Wynwood,” one member said.

Some were critical of the building’s cake layered look, saying the components need more articulation and the art needs to come down into the ground floor level.

Committee member Erik Rutter said, “We do have to think more about the art, not just as a mural in a box. I like the shadow wall … Magellan is a great developer. This will be a great addition to the neighborhood.”

Mr. Wernick said the applicant is wholly owned by Magellan Housing, an affordable housing developer active in Texas and Florida.

Magellan is developing Wynwood Works in partnership with the Omni CRA. In addition to owning the land, the CRA is providing financial support towards development costs.