Advertisement
The Newspaper for the Future of Miami
Connect with us:
Front Page » Transportation » Tri-Rail milestone: 100 millionth rider 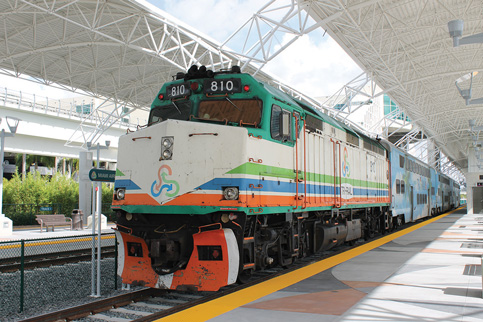 Tri-Rail carried its 100 millionth rider July 9, although it’s still not at full capacity from the pandemic recovery. At 92%, Tri-Rail is running from all 18 cities in Miami-Dade, Broward and Palm Beach counties.

“We kept running throughout the pandemic,” said Steven Abrams, executive director at the South Florida Regional Transportation Authority and Tri-Rail. The line reduced the number of trains from 50 to 18 a day, and has been gradually returning to full service since then, Mr. Abrams said.

Tri-Rail is funded principally by the state Department of Transportation in Miami-Dade, Broward and Palm Beach. In 2018, a survey showed that 22.5% of passengers traveled from Miami-Dade and 24.5% traveled to Miami-Dade. Weekday passengers were roughly 15,000 pre-pandemic, according to SFRTA, and they are now at 50% of that.
Tri-Rail outsources to private companies for engineers, conductors, maintenance and security personnel, Mr. Abrams said. “The Tri-Rail outsources took a hit during the pandemic. They were still obligated to provide services under our contracts.”

But the Coronavirus Aid, Relief, and Economic Security Act, CARES, helped fund Tri-Rail during the pandemic. “The CARES Act allowed us to use the money for operations, so those conductors and engineers. But it is only a one-time deal,” Mr. Abrams said.

Mr. Abrams expects Tri-Rail to be at full service by the end of the year.

There has been a stalled deal with private rail carrier Brightline that would deliver riders to downtown Miami. Covid has affected this delay even further, stated Mr. Abrams.

“Brightline needs to implement the positive train control federal mandate that requires a GPS for crash avoidance, PTC,” Mr. Abrams said. “Brightline is the host railroad on the Florida East Coast Railway, where we seek to travel, but they have to implement the same GPS we use before we can get on their tracks to Miami Central.”

The federal government required railroads across the country to install the Positive Train Control, or PTC. “The deadline was Dec 31, 2020. We all had to scramble to meet that,” Mr. Abrams said. “But Brightline suspended their service during the 2020 pandemic and didn’t have to meet the deadline because they weren’t running.”

Brightline is now using the same PTC as other railways, Mr. Abrams said, but the two rail systems probably will not be running together until late 2021.