Advertisement
The Newspaper for the Future of Miami
Connect with us:
Front Page » Arts & Culture » Statue of Liberty twin’s head at home in Miami

Statue of Liberty twin’s head at home in Miami 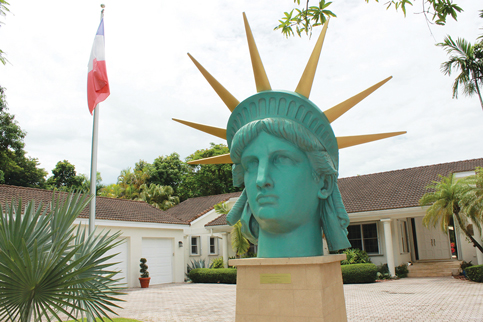 “It’s a big symbol of friendship. The statue conveys freedom and hope,” Laurent Gallissot, consul general of France in Miami, said of a 7-by-7-foot copy of the head from the original cast of the Statue of Liberty that arrived at his Coral Gables home July 1 for a celebration of both American Independence Day and then French Bastille Day on July 14.

“The crown is so beautiful because its shiny, and we were all impressed because it fits perfectly with the natural landscape. It’s a tropical Statue of Liberty,” said Nathalie Cluzet-Bertot, head of public affairs in the Consulate of France in Miami.

It has been a treasure hidden in the Haligon Fine Art studio, Ms. Bertot said. The Haligons are a family that is built of five generations of sculptors.

Louis Haligon, born in 1862, helped enlarge the original Statue of Liberty. He worked with the sculptor who designed Lady Liberty, Frederic Bartholdi.

Louis’ descendants are lending the Consulate of France in Miami an original plaster cast of Lady Liberty’s head. And this is not the only gift the French are giving to celebrate both countries’ history of freedom.

The bronze statue created in 2009 in Paris stands 7 feet tall and crossed the Atlantic by boat to stand by her “big sister” in New York on July 4. From there, the bronze Statue of Liberty will move to Washington, DC, to celebrate Bastille Day.

“The statue is a strong link between two people, between the Americans and French,” Mr. Gallissot said. “It’s not from the government.”

The French were inspired by America’s Revolution and used the Declaration of Independence as a model for the French Declaration of the Rights of the Man and the Citizen in 1789. French abolitionist Edouard de Laboulaye crafted the idea of the Statue of Liberty in 1865 as a 100-year gift of friendship to America. It was unveiled in New York in 1886.

The Statue of Liberty is not a symbol of freedom only for Americans but also for the French, as it is a reminder of their past and their friendship with America, both Ms. Bertot and Mr. Gallissot agreed.

The Consul General proudly has Lady Liberty’s head displayed by the palm trees, as a reminder of history of freedom and the friendship. “It is so important how people look at the statue,” Ms. Bertot said.

“For some it’s freedom and hope, a new life and a better life,” Mr. Gallissot said. “That’s why it is so important to us as humans and French people.”