Advertisement
The Newspaper for the Future of Miami
Connect with us:
Front Page » Government » Army orders 830,000 yards of sand to restore Miami Beach 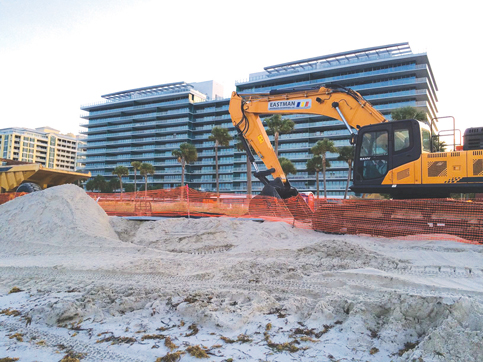 “Until we change the movement of the planets, this is going to always be a project,” said Miami Beach Mayor Dan Gelber of the renourishment of the city’s beaches to begin this fall.

The Army Corps of Engineers is funding a beach renourishment project that stretches over 10.5 miles. Since the late ’60s, Sunny Isles, Bal Harbour and Miami Beach have been struggling with erosion. “I grew up here,” Mr. Gelber said. “I remember going shelling as a kid when the dredges were brought in. We found great shells because they were from the middle of the ocean.”

To keep the tide from getting too high, the Army Corps is delivering 830,000 cubic yards of sand in Miami Beach in September and October. “We have four hot spots that take away width of the beach: 63rd Street, 55th Street, 44th Street and 32nd Street,” Mr. Gelber said.

Miami Beach beachgoers in the early fall should expect to see dump trucks delivering the sand.

The sand brought to beaches has strict qualifications. “It is between 0.062 and 4.76 millimeters. It is all a similar color and grain size,” said Erica Skolte, U.S. Army Corps Jacksonville public affairs specialist. It must be of a certain light color because if the grains are too dark, the sea turtles’ nests will bake their eggs. This changes the sex of the turtle within the egg.

“Wildlife lays out our timeline. Sea turtle season is from April 1 to Oct. 31, so it can get pushed back according to the turtles’ season,” said Elizabeth Wheaton, assistant director of environment sustainability for the City of Miami Beach.

Beachgoers will see bulldozers dropping off the sand and cranes distributing it. There are teams run by contractors that work in spreading the sand. The time it is distributed is based on hurricane season along with natural erosion.

“It’s in everyone’s best interest to do this as quickly as possible,” Ms. Wheaton said. “The beach has to close while this is happening and being spread north to south. But it’s amazing how much they can do in a short period of time.”

The Miami Beach city government is working on a separate project with the dunes. “Dune evaluation is a study so we can understand how we can make adjustments to the dunes. They capture sand during storms and is home to wildlife that’s native to Miami Beach,” Ms. Wheaton said. The study is anticipated to be done during the beginning to mid 2022.