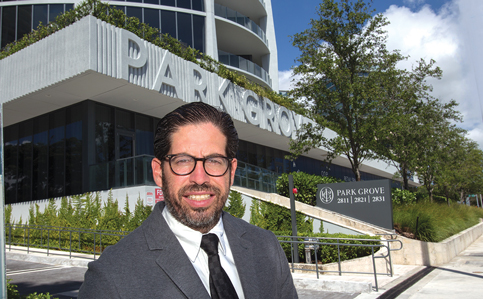 Miami-Dade and developer Terra have agreed to early terms of a project near Dolphin Station that is expected to yield the county more than $4 billion over a century.

Commissioners June 15 approved a 97-year contract with the Miami firm for construction of Upland Park, a mixed development to span 43 county acres where the Dolphin Expressway and Florida Turnpike intersect in the unincorporated Beacon Lakes area.

Terra will pay all costs, including $20 million to integrate Dolphin Station into the 3-million-square-foot project, which will feature offices and retail, 1,700 apartments, a hotel, school and science facility, according to county Chief Operations Officer Jimmy Morales.

The development and lease agreement will generate $1.17 billion for the county, which will collect $3 billion more in real estate taxes.

Terra CEO David Martin said by email Tuesday that Upland Park will have 200,000 square feet of retail and create “thousands of jobs.”

Lobbyist Brian May, speaking for Terra June 10, said the project will have 1,837 residences. Some will be marketed to military personnel stationed at the US Southern Command in Doral, and Terra will try to offer others at workforce rates, he said.

“The intent of the project is to keep the development cost relatively low so we can offer a project targeted to those defined as workforce – 80% to 140% of the area median income,” he said.

Terra agreed to a $1 million deposit to guarantee it will permit and finance the project, plus a non-refundable $4 million development fee.

The firm’s next step is to submit design and construction packages to the county’s Internal Services Department, which will determine “appropriate small business program measures.”

Mr. Martin said his firm will provide more specifics, including a construction timeline, in “the coming months.”

The project will feed and connect with the East-West Corridor, a planned rapid bus route to run from Miami International Airport to West Miami-Dade on the Dolphin Expressway.

Few other details are available now, including how the project will impact area traffic. No traffic study has been done.

But commission Chairman Jose “Pepe” Diaz, who sponsored the deal, said a traffic study will be done before Terra gets a 90-year lease for the property and shovels enter the ground.

“I would not allow any project of that magnitude without the proper streets widening to be done,” he said. “Trust me. It’s in my district.”

Mr. Diaz called Upland Park “a type of legacy project” for him and commissioners. “It’s something I’m very proud of,” he said.

By approving the deal, commissioners were allowing platting and rezoning to begin, Mr. Morales said.

“It’s during that phase that typically [those] kinds of traffic studies [are done],” he said. “The developer is going to have to show how it’s going to address, mitigate, whatnot.”

“Once the camel’s nose is under the tent, it’s very difficult to later backtrack because the first thing they’re going to say is, ‘You approved it June 15,’” he said.

Mr. Libhaber assured him the county still had flexibility.

“This is not the lease yet,” he said. “This is the development.”