Advertisement
The Newspaper for the Future of Miami
Connect with us:
Front Page » Top Stories » Despite big gaps, Miami tourism passes pre-covid levels 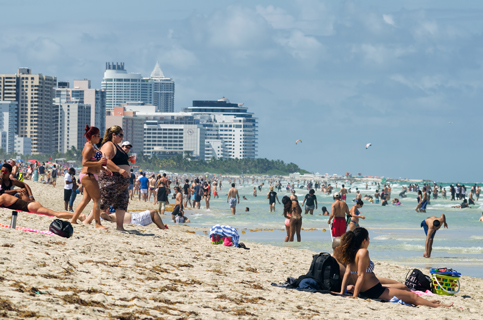 Miami-Dade’s tourism industry is surpassing many comparable 2019 statistics despite a glaring lack of international, convention and cruise travel.

At the Greater Miami Convention & Visitors Bureau’s State of the Tourism and Hospitality Industry’s May breakfast, experts predicted summer hotel occupancy highs would approach summer 2019 lows. These predictions were vast underestimates: for the past month, hotel occupancies have not just crept toward 2019 lows but consistently exceeded the number of bookings tracked in the last normal, non-covid year.

May 14 was the first date occupancy crept above 2019, with convention bureau statistics showing bookings at 101% of their level of 2019, which bureau President and CEO Bill Talbert noted was considered a “record year.”

Occupancies have continued to climb in relation to counterpart 2019 figures since that date, with each day between May 14 and June 5 (the latest totals on record) hitting better occupancy numbers than they have in the past two years. Occupancy rates relative to 2019 hit their high so far on Friday, June 4, when 117% of the number of rooms booked in 2019 were occupied.

These aren’t the only numbers that are climbing. Air travel, while not quite reaching 2019 levels, has hit or exceeded 90% of these numbers since May 19, topping out at 98.5% June 2.

Diner totals at the county’s restaurants recorded via Open Table Reservations on the bureau’s research site have soared past their 2019 counterparts. On Saturday, May 22, bookings at a sampling of Miami-Dade restaurants topped 2019 numbers by 50%. They’ve been hovering near or above 100% of 2019 reservation numbers since March, and have consistently been roughly 125% of 2019’s figures since the last week in April.

The one metric where 2021 numbers still trail their 2019 counterparts is visitors to Miami-Dade attractions and museums. At their highest points this year, visitors to these attractions tallied almost 80% of visitors who came in 2019. But for the most part, this metric has varied greatly between 40% and 70% of 2019 numbers.

The strong rebound in hotel occupancy, Mr. Talbert told Miami Today, comes despite a hole in the travel scene once filled by international, cruise and business travel. In a normal year, he said, cruisers are about 10% of overall visitors and stay an average 2.9 days in a hotel.

International travel, he said, has also slowed, but as vaccinations continue to roll out around the world, more visitors are starting to roll in. Miami, Mr. Talbert said, is one of the most accessible cities to get to in the world, and airlines are consistently adding routes in and out of the country.

Meetings and conventions, Mr. Talbert said in May, are a bureau focus, both in hotels and the newly renovated Miami Beach Convention Center. Freddie Peterson, center general manager, previously told Miami Today it had 20 events lined up for the rest of 2021, including the ITExpo tech show this month and Miami Swim Week events Cabana and SwimShow in July.

But while leisure and luxury bookings are steadily increasing, according to Wendy Kallergis, president and CEO of the Greater Miami and the Beaches Hotel Association, business travel probably won’t return to normal until at least 2022 and maybe even 2023.