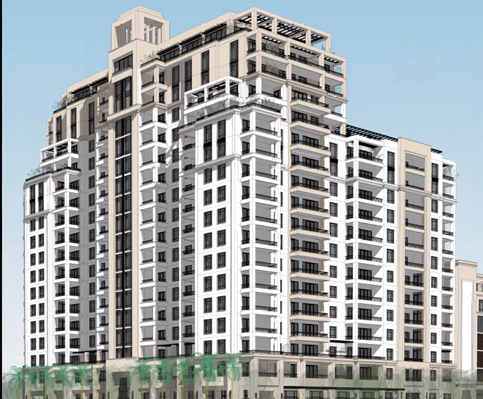 Codina Partners aims to begin site preparation this year for a luxury residential project aimed at empty-nesters and those looking to “right-size.”

“Regency Tower Coral Gables,” said Executive Chairman Armando Codina via email, “is located between Valencia and Almeria Avenues and east of Salzedo Street.” Codina acquired the land, Miami Today reported in October, as part of a three-way land swap with Mercedes-Benz of Coral Gables and the city itself. In the deal, the city moved emergency services from the past building at 2801 Salzedo St. to one at 2151 Salzedo on land originally owned by Codina. Codina, in turn, received Mercedes Benz of Coral Gables’ 150-spot surface lot at 300 Almeria Ave., and Mercedes moved across the street to the city’s old public safety building.

The complex, he said, will feature conventional units that can be leased annually as well as “Sky Homes,” which will feature longer leases of five to 10 years. These units, he said, will range from 3,000 to 10,000 square feet and be on the top five floors of the building.

The building, Mr. Codina said at a Coral Gables Chamber of Commerce meeting, is aimed at “empty-nesters” and presents an alternative to a traditional condominium lease while maintaining services and amenities. A secondary market, he said, is those moving to Miami for corporate relocations and looking to get established in the area.

The complex, he said, will feature a restaurant on the ground floor headed by a world-class chef who has not yet been announced.

“I’m talking to a person that I think is one of the top five chefs in the world,” Mr. Codina said, “and I hope to bring him here.”