Advertisement
The Newspaper for the Future of Miami
Connect with us:
Front Page » Transportation » Underdeck connector to follow vast signature bridge/I-395 project 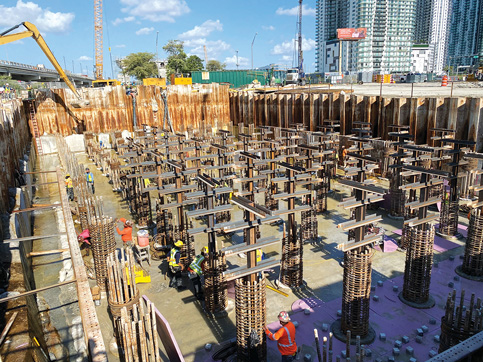 As Downtown Miami approaches another busy summer abuzz in construction, steady progress continues on the I-395/SR 836/I-95 Design-Build Project.

An added benefit to improved freeway surfaces is the plan to reconnect areas to downtown, including Overtown, Edgewater and the Omni neighborhood.

Miami commissioners approved the first step of a deal with the Florida Department of Transportation (FDOT) to help design and manage several blocks of land under a rebuilt I-395.

City leaders authorized an agreement “for the City of Miami to collaborate in the development and coordination of the I-395 Heritage Trail/Signature Bridge Underdeck Project” along I-395/State Road 836 between Northwest Third Avenue and Biscayne Bay.

The transportation department will be responsible for construction of the underdeck based on city-provided designs.

As major road construction moves ahead on all portions of the overall project, the City of Miami, FDOT and area stakeholders work on refining the “underdeck” concept that was submitted by the city to achieve a Consensus Plan.

The Consensus Plan is expected to be final by February 2022 and the design is anticipated to begin soon after.

“Work on the I-395/SR 836/I-95 Design-Build Project continues to progress as crews work day and night along all three project corridors,” said Senior Community Outreach Specialist Oscar Gonzalez III in an email Tuesday to Miami Today.

The work includes a “signature bridge” over Northeast Second Avenue and Biscayne Boulevard, an upper deck of traffic built over SR 836 and the Miami River, and the addition of one lane to the northbound entrance to I-95.

The latest report from Mr. Gonzalez offers a breakdown of ongoing work and future activities along the three project corridors.

All the Auger Cast Piles (ACP) for the signature bridge center pier footer and the four arches that are being constructed as part of this phase of construction have been completed.

“The contractor is currently working on forming the reinforcing steel for the rebar cage in the massive center pier footer. It will take approximately 1.7 million pounds of steel to complete the task,” said Mr. Gonzalez.

“Once the rebar cage is completely formed then approximately 500 concrete trucks will mobilize into the area sometime in late June/early July to pour out the footer. Crews are working on excavating, dewatering, and chipping the ACPs at the four arch sites to prepare for the concrete pours.

“Further to the west, adjacent to the FEC/Brightline rail facilities, the contractor is utilizing a specialized segment lifter to erect the prefabricated bridge segments over the tracks,” he wrote.

The segment lifter weighs over 50 tons and has a lifting capacity of 90 tons. (A time lapse video of the lifter at work can be seen at http://www.i395-miami.com/segment-lifter-at-work/).

A second crew continues to erect bridge segments over the intersection of Northwest Third Avenue and 14th Street at night. About 570 segments have been erected to date. Additional foundation and pier construction is also occurring along the entire length of the I-395 corridor.

■In late July, the North Bayshore Drive ramp to eastbound MacArthur Causeway will be closed to allow for construction of the new ramp and continue construction of the arches for the signature bridge. A temporary left turn will be constructed on southbound Biscayne Boulevard to allow drivers to access the MacArthur causeway from the ramp that is on the south side of I-395. (A video of the ramp closure can be viewed at http://www.i395-miami.com/north-bayshore-drive-ramp-closure/).

“Work on the double-decked section continues with significant progress made on the construction of foundation and piers that will support the new second level of SR 836,” wrote Mr. Gonzalez.

This second level will allow for a direct connection from SR 836 to the MacArthur Causeway and southbound I-95 thereby reducing weaving movements due to through traffic mixing with traffic exiting/entering local roadways.

The existing SR 836 roadway (lower level) will be the collector distributor roadway that will allow access to/from local roadways and I-95. Construction of the four piers located just west of Northwest 17th Avenue has been mostly completed.

Crews are also working on foundation and pier construction from Northwest 17th Avenue east toward the Miami River and at the parking facilities for the Richard E. Gerstein Justice Building.

He said drivers on SR 836 can now see the piers that will eventually support the second level coming up through the middle of the roadway.

There is ongoing widening of eastbound SR 836 from Northwest 10th Avenue to I-95 with erection of bridge beams expected later this month.

Moving further east, the widening of the existing SR 836 ramp to northbound I-95 from one lane to two lanes continues with steel bridge beam erection over I-95 completed and erection of concrete beams for the approach to the ramp starting at Northwest Seventh Avenue expected to begin in two to three weeks.

The widened ramp is expected to open to traffic in the fourth quarter of 2021.

The concrete replacement on I-95 from Northwest Eighth to 29th streets is mostly completed, he said.

The contractor is now working on widening the ramp lanes from westbound I-395 and eastbound SR 836 to northbound I-95 over Northwest 17th Street and installation of new guardrail, intelligent transportation systems conduit and devices.

Mr. Gonzalez said it is expected that all work on I-95 between Northwest 17th and 29th streets will be completed by the end of the fourth quarter of 2021.

Preliminary work on the massive project commenced in December 2018, and full-on construction began in early 2019. Anticipated completion is fall 2024.