Advertisement
The Newspaper for the Future of Miami
Connect with us:
Front Page » Arts & Culture » PAMM, HistoryMiami museums set to open latest exhibits 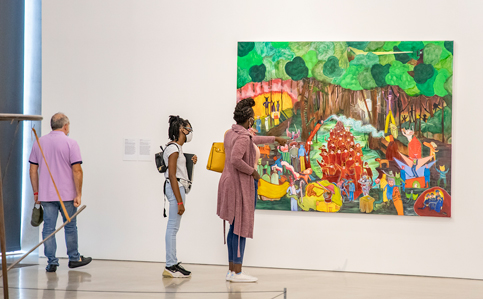 Attendance numbers have slowly but surely been rising in downtown Miami’s major museums.

Since reopening in October, attendance rates are up 35%, which is quite not at pre-pandemic numbers just yet, said Jorge Zamanillo, HistoryMiami Museum’s executive director.

“But you can tell the trend is heading that way. I think that’s mostly because of people’s comfort level on visiting public spaces,” he said. “With the recent mandates, loosening on restrictions for mask-wearing, for instance, and going out, things will change, even though we’re still requiring masks indoors. I think people feel more comfortable now.”

Museums in general are having more events and exhibit openings and programs that are onsite versus virtual, Mr. Zamanillo said. “Audiences will feel a little bit more that it’s normal. That’s the way things are supposed to be now.”

On July 28, HistoryMiami will have its exhibition opening “It’s a Miami Thing,” which highlights the museum’s collection, and that exhibit will be “our first major opening and the first time we have an event in over a year and a half,” Mr. Zamanillo added.

Also seeing an upward attendance trend, Pérez Art Museum Miami’s director Franklin Sirmans said his staff is making sure everybody is safe and healthy as Miami-Dade goes through the last stages of this crisis.

“It’s been going up consistently every month,” he said, “We’re probably like 50% to 60% of what you would say is normal.”

It has to do so much with just comfortability with being indoors, like how the museum has been promoting its outdoors is the new indoors, Mr. Sirmans said. “A lot of people come and go to the restaurant and walk through the sculpture garden, but there’s still a little bit of hesitancy towards being in closed spaces, and it gets better each and every day, with all of the news that comes out every day.”

On June 17, “Heaven’s Gate,” a monumental new work by video artist Marco Brambilla, is set to open. It’s a lavish, satirical and vertigo-inducing meditation on the Hollywood’s “Dream Factory.”

“It’ll be a lot of fun. We got to figure out how to clean the goggles all the time, but it’s going to be a great experience, even if you only look at it on the digital screens that are beyond,” Mr. Sirmans added, “and in terms of reminiscing about Hollywood movies and also seeing moving images that are like a time capsule of human emotion from the last year.”