Advertisement
The Newspaper for the Future of Miami
Connect with us:
Front Page » Opinion » Miami’s birthday present should be a visible Miami Circle

Miami’s birthday present should be a visible Miami Circle

As civic and government leaders prepare to celebrate Miami’s 125th birthday next month, it’s pitiful that its oldest known historic relic and one of its most significant locations is purposely buried far out of sight – and out of sight is out of mind.

That historic location is the Miami Circle on Brickell Avenue right across from downtown Miami at the mouth of the Miami River, certainly at the heart of activity of this global metropolis and in an ideal position to show off our history to the world. The State of Florida purchased the historic site and its Tequesta Indian legacy to do just that.

But instead of showing the site off, the state reburied it – out of sight and out of mind.

As Miami Today’s Marilyn Bowden reported last week, the state now plans what it terms a major upgrade. Unfortunately, that upgrade consists primarily of new St. Augustine sod over the Miami Circle and 1,450 plants, many right over the eye of the circle itself. Still out of sight.

If Miami history gets too little notice dating from the city’s founding in 1896, it’s nearly invisible for the thousands of years when this was a Native American stronghold.

The state was to display the focal point of that legacy when it bought the 2.5 acres at the mouth of the river in Brickell in 1999 to spotlight our best-known site in Native American history, the Miami Circle. But few living people have ever seen it.

The history at the Miami Circle has been one of neglect since Ms. Bowden in a 1998 article revealed it existed under the planned site of a condo development that was to replace the just-razed Brickell Point Apartments. County archaeologist Bob Carr told her as he uncovered artifacts at the circle in a mandatory examination that “the agreement is that when they’re ready to begin construction we’ll leave.”

That day never came. Nor did the condo development. The building site was hard to reach, the public got excited about the circle and the would-be developer then sold his $8 million land purchase for $26.7 million to the state as Florida sought to preserve a 2,000-year-old, 38-foot-diameter stone circle of Tequesta origin.

After the state purchase, the site was controlled consecutively by the National Park Service, what was then the Historical Museum of Southern Florida, and now the Florida Department of State. The circle was never properly displayed. In 2003 it was reburied to protect it from weather. It is now under a park that long didn’t even have proper lawn care. 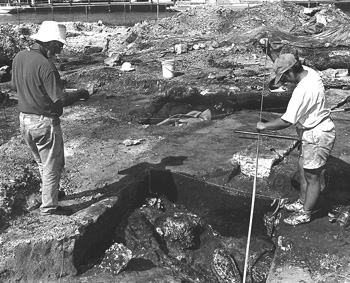 Archaeologists at work on the site of famed Miami Circle after it was discovered in 1998.

Thought the neglect was not intentional, the site has been nearly useless as a historical touchstone for the beginnings of Miami and its peoples.

What long has been lacking is money even to create the 3-D replica of the circle above ground that the state promised five years ago, much less showing the original circle under a protective building and glass as was proposed before that. In Rome, 2,000-year-old sites can be seen under protective glass, even deep underground. But Florida has no respect for its own history of 2,000 years ago.

As is often true of public projects here, what has been available is cash to buy but seldom funds to operate and to endow. 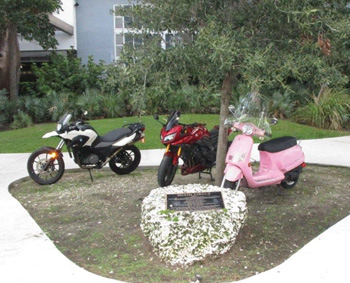 By 2016, the Miami Circle site had been reburied and become a parking area for mopeds.

The Miami Circle is not just some casual state land. It has been formally declared a National Historic Landmark.

So when the state has told us that it recognizes the circle’s historic significance and is committed to improve, maintain and preserve it, we’re pleased. But we’d be far happier if a firm plan and the money were in place to operate, publicize to lure visitors and endow the site properly.

A replica of the circle and what should come with it are the minimum required. Moreover, the Miami Circle needs not just the site but the money to attract both visitors and Miamians, as well as the funds to care for and upgrade the site in perpetuity, regardless of future state budget cuts that are inevitable.

Miami and Florida do precious little to recognize the indigenous people who were our predecessors. Can’t we do this right by state legislation, not just by hoping agencies have a relatively few dollars for landscaping?

As we have said again and again, the minimum must be either a full-scale view of either the circle itself or a highly realistic replica. There must be well-annotated displays with artifacts found at the circle site and at two smaller circles found later on the river’s north bank. There also needs to be shelter overhead for visitors plus parking, not just the circular driveway for school buses now at the site.

This is an historic find in the heart of a city that lures multiple millions of visitors yearly. Surely someone in state government has seen how such finds are treated properly around the globe. We should be able to match that treatment, promote visitation widely and properly, and respectfully tell the stories of our early residents, the Tequesta people.

Where are our local state legislators to lead the charge? Florida right now is getting a vast inflow of federal funds for economic development and for infrastructure. This historic site qualifies amply on both counts.

Let’s put the Miami Circle where it belongs – in full sight and top of mind.