Advertisement
The Newspaper for the Future of Miami
Connect with us:
Front Page » Communities » Historic Miami Circle Park closing for an upgrade

Written by Marilyn Bowden on May 25, 2021
Advertisement 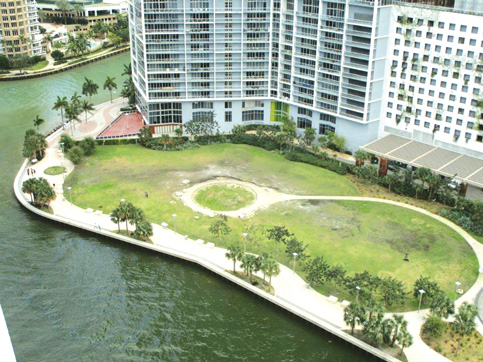 Miami Circle Park is about to get a long-awaited sprucing up.

The park sits atop the Miami Circle, a 2,000-year-old, historically significant Tequesta Indian artifact comprised of holes and basins carved into the limestone. It was discovered in 1998 during a routine pre-construction archeological survey, and briefly enjoyed international attention. The State of Florida purchased the property in 1999 for more than $26 million. In 2002 it was designated a National Historic Landmark.

Due to its fragility and exposure to wind and water damage, the artifact itself has long been buried under layers of protective limestone. Gradually the park’s 2.5 acres have fallen into neglect, inundated with trash and pet waste, homeless encampments and illegally parked vehicles.

Mr. Aguirre said contractors hired by the Department of State will replenish the park’s landscaping with more than 1,450 new plants and 46,950 square feet of new St. Augustine sod. Many of the plants will be placed directly over the eye of the circle beneath.

Originally, he said, the trees planted in the islands along the sea wall were surrounded by crushed shells, most of which have blown away. They will be replaced with small, decorative river rocks.

The project is estimated to take about 100 calendar days, suggesting the park will re-open around mid-September.

Mr. Aguirre expressed appreciation to the State of Florida on behalf of the commission. “This very special, ancient Tequesta Tribe site,” he said, “is the trailhead of the public Miami River Greenway along the river’s south shore.”

The Department of State’s Division of Historical Resources did not respond to requests for comment.

5 Responses to Historic Miami Circle Park closing for an upgrade