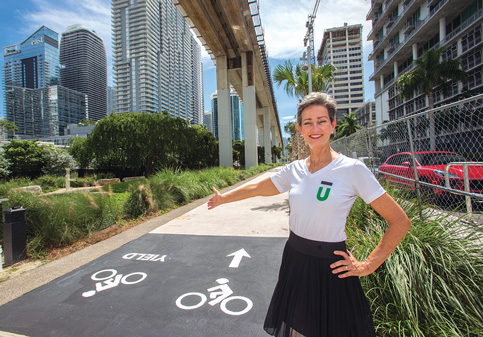 Getting around Miami-Dade isn’t the easiest thing to do. While the county’s roadways are many, they’re often congested, leaving motorists wishing alternative modes of transportation were more plentiful.

The good news is that some residents are working hard to add to the local mobility network – residents like Meg Daly, president and CEO of Friends of The Underline, an organization she founded to recreate a 10-mile stretch below the Metrorail into a vibrant, 120-acre urban trail with art, physical activities, culinary fare and more.

“I saw a dirty space under the elevated Metrorail. She saw a park,” said Alberto Ibargüen, president and CEO of the John S. and James L. Knight Foundation.

“Transformational projects always have these qualities,” he said. “They’re always fact-based – plans are based on what the reality is. They take vision. And most of all – and she has it in spades – it takes the tenacity to stick to it despite everyone laughing and chuckling. It’s fantastic. I’m a big supporter, and [the Knight Foundation does] fund The Underline.”

Terra President David Martin, who sits on the board of Friends of The Underline, echoed those sentiments about Ms. Daly’s passion project, which will cost an estimated $120 million to complete and $3 million per year to maintain.

“I’m just so impressed at how she runs the organization, how she pushes and all the accomplishments she’s made and continues to make,” he said. “It’s pretty special.”

The first phase of the ambitious project, the half-mile Brickell Backyard, opened in February. It cost $16.5 million in city, county and state funds and includes a community stage, butterfly garden, gaming tables, gathering spaces to eat, play, discover and relax, as well as an urban gym complete with a running track, exercise equipment, soccer mini-pitch and basketball half-court.

Phase two, a two-plus-mile Vizcaya stretch from Southwest 13th Street to Southwest 19th Avenue, is to break ground this year and open in 2023. The last seven-mile length is to be completed two years thereafter.

Ms. Daly, who described her work as being “like a prism with so many facets, each one a jewel,” told Miami Today that people’s desire for the kind of offerings The Underline provides was amplified by this last year’s events.

“I think the pandemic showed pent-up demand for people wanting safe places to walk and bike connected to accessible, equitable public green spaces,” she said. “In forward-thinking communities across the world, I think we are part of a movement to create world-class, multi-dimensional mobility and community-building amenities like The Underline from underutilized infrastructure.”

Mr. Sanchez-Resnik, he said, has for years worked to secure crucial funds to restore the popular five-mile route that runs through Coconut Grove from the Rickenbacker Causeway to Cocoplum Circle in Coral Gables.

“You always saw him at festivals, running a free bicycle concierge. He realized we don’t have very safe bicycle connectivity and found that if the Commodore Trail, a county initiative, were completed, the area would be much safer,” he said. “He’s been fighting to get everyone onboard, passionately advocating for that with county, city and state folks, regularly taking elected officials on tours to get them to understand why it’s important, and we recently got significant funding from the county that will help us complete it.”

Before moving to Miami in 2005, Mr. Sanchez-Resnik had volunteered as a bicycling advocate in the San Francisco Bay Area. Once he arrived in Miami, he said, he looked for a project that could make a difference.

The more than 50-years-in-the-making Commodore Trail revitalization project was a logical choice. In October, thanks in great part to his advocacy, Miami-Dade commissioners approved spending $1.3 on a master plan and repairs for the trail.

“The trail has been in county documents since 1969. Although heavily used by cyclists and runners, it was incomplete and neglected. It needed champions and advocates,” said Mr. Sanchez-Resnik, who also leads Bike Coconut Grove. “I’m extremely fortunate to have found a group of like-minded people who have helped to build Friends of the Commodore Trail into an organization that will carry our mission forward for future generations.”

Keeping people moving during the pandemic required dedicated work from the public sector, and one person who should be recognized is Mike Zayas-Morales, transportation planning manger for the Town of Miami Lakes, said Freebee managing partner Jason Spiegel.

An advocate for providing safe routes to non-motorized modes of travel, Mr. Zayas-Morales in April received the “2020 Bicycle Professional of the Year Award” from the Florida Bicycle Association.

Since he took over the role of transportation planning manager in March 2020, Mr. Spiegel said, Mr. Zayas-Morales has shown a commitment to accessible, inclusive transportation and prioritized safety.

“Over the past year during the pandemic, Mike worked diligently to provide safe, resilient and effective services to residents, employees, businesses and visitors of the town,” Mr. Spiegel said. “His work has helped Miami Lakes regain their footing, rebuild their local economy and provide an enhanced quality of life for its resident during this unprecedented time.”