Advertisement
The Newspaper for the Future of Miami
Connect with us:
Front Page » Real Estate » Wynwood project’s design returns to win Round Two

Written by John Charles Robbins on May 18, 2021
Advertisement 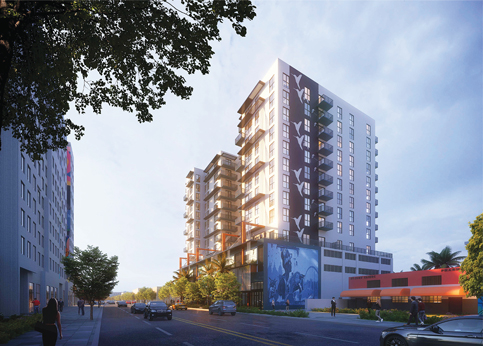 A plan to construct a 12-story building containing commercial space and workforce housing in Wynwood garnered the approval of the Wynwood Design Review Committee after some recommended changes were made.

At its April meeting the committee expressed concerns about the scale and mass of the proposed building and how the façade was being used. The developer then chose to voluntarily defer the project in order to address concerns and suggestions from committee members.

When the updated plan was presented May 12, the committee unanimously recommended approval, along with a few conditions.

View 29 will have 116 workforce housing units, about 100 parking spaces, and amenities that will include a swimming pool, community room and playroom accessible to all building residents.

The entire project has a floor area totaling 199,864 square feet, including about 6,910 square feet of commercial-retail. Open space provided would be 5,609 square feet. The zoning allows up to eight stories but the developer is requesting four additional stories in exchange for public benefits to be provided.

Attorney Brian Dombrowski, representing the developer, detailed the changes made since the April meeting, including:

■The ground floor retail façades have been articulated to enhance the pedestrian realm.

■Mural areas were enhanced and some variety was introduced into the size of the mural areas including the expansion of the center mural.

■The tower façade has been updated with varying façade colors to provide additional perceived depth for the recessed portion of the tower.

■The cable system that defines the building’s design has been updated to emphasize the use of the cables in more prominent locations.

■A mural wall has been added on the east façade.

“Thank you for coming back,” said Chairman Victor Sanchez, noting that the changes make the project significantly better.

“I like the modified ground floor; it breaks it up and makes it a lot more pleasant experience walking down 29th Street … I also like the play of colors; it helps to break up the mass. This is a little more playful,” Mr. Sanchez said.

According to Jennifer McConney-Gayoso, principal at Studio Mc+G Architecture, the developer wants to highlight the history of the evolving Wynwood neighborhood – the former garment district.

“We wanted to tell the story about the fabric of the neighborhood with fabric. With denim. The working-class base and pedestal (of the building) will be made up of threads … stainless steel threads that weave and create an art treatment, screening the garage,” Ms. McConney-Gayoso told the committee in April.

The approval vote last week included these conditions: make the mezzanine level façade solid and not include louvers to vent the garage at that level; enhance the garage entrance and conceal the garage lighting as much as possible; and enhance the design of the northwest corner.