Advertisement
The Newspaper for the Future of Miami
Connect with us:
Front Page » Communities » New construction OK’d at 70-year-old MiMo motel

Written by John Charles Robbins on May 18, 2021
Advertisement 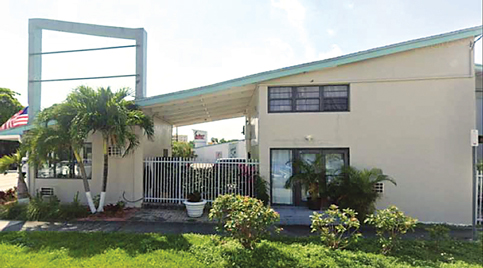 A 70-year-old motel in the MiMo or Miami Modern Historic District will be allowed some new construction after a recent decision of the city’s Historic and Environmental Preservation Board.

At its May meeting the board unanimously approved a request from Domingo Rodriguez, on behalf of owner Sandip Patel, to make alterations to the motel at 6200 Biscayne Blvd., the Shalimar Motel.

The application shows the property is within the Miami Modern/Biscayne Boulevard Historic District, the North Gate Subdivision, and the Upper Eastside NET (Neighborhood Enhancement Team) area. It’s on the west side of Biscayne Boulevard between Northeast 62nd and 63rd streets.

On June 6, 2006, the Historic and Environmental Preservation Board designated, as a contributing structure, the 6200 Biscayne Blvd. site as part of the established historic district. The motel was built in 1951.

City code requires, in order to make any changes to the motel, the owner must request and be granted a Special Certificate of Appropriateness to allow for alterations.

The city’s preservation office recommended approval, along with several conditions.

Staff analysis said the proposal is to enclose a roofed open space to create a hallway between the one-story office structure and the two-story apartment structure at the northern side of the site.

The roof will be upgraded as it will be enclosing habitable space but will retain its existing form.

The applicant stated the reason for requesting the enclosure is for security and weather safeguarding, the analysis said.

The original request was that the new exterior walls would be of stucco on plywood sheathing fixed to a metal stud frame.

After working with staff, and at the board’s direction, the applicant agreed to enclose the area with opaque or translucent glass walls. Wall-length curtains will be allowed for privacy.

Staff found that the request “does not adversely affect the historic, architectural, or aesthetic character of the site or the aesthetic interest or value of the historic district,” subject to conditions.