Advertisement
The Newspaper for the Future of Miami
Connect with us:
Front Page » Profile » Alberto Ibargüen: Expands his innovative direction of the Knight Foundation

Alberto Ibargüen: Expands his innovative direction of the Knight Foundation 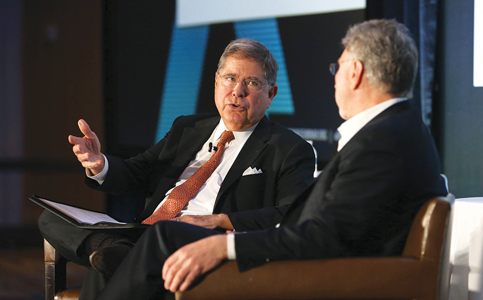 Alberto Ibargüen was in college when he saw experimental composer John Cage perform. It was 1965, and in an old New England brownstone chapel the musician had arranged metal sheets running from the back of the stage to the front pews.

“He stood in the back and rolled ball bearings down – plink, plank, plank – and I had that eureka moment,” he said. “The revelation for me was that this was billed as music. And if this is music, then there are no rules except for the blinders you place on your imagination.”

When he became president and CEO of the non-profit Knight Foundation in 2005 after a long and distinguished career in news and publishing, that insight from 40 years prior informed how he planned to lead the organization.

The foundation is named for its co-founders, brothers John and James Knight, who grew their family newspaper business, which included the Miami Herald, to at one point become the largest such company the nation.

Accordingly, its philanthropy centered largely on supporting journalism in the 26 cities where the company had newspapers when James died – communities in which the organization still operates.

But when Mr. Ibargüen took over, the news business and other media industries were headed toward upheaval thanks to the internet.

Rather than ignore what was coming, he retooled the Knight Foundation’s operations to meet new needs, including significant grant writing for art and technology, as well as a shift in how the organization, whose assets are about $2.4 billion, invests in journalism.

“Our community goal is to figure out how to continue delivering local news in a way that is both useful to the community and sustainable as a business,” he said. “I don’t want you to depend on my foundation, an advertiser or an individual’s wealth and whim. I want you to be an independent newsroom like ones I was privileged to participate in at Hartford, New York and in Miami.”