Advertisement
The Newspaper for the Future of Miami
Connect with us:
Front Page » Opinion » At last, Miami seriously probes marine stadium economics

Written by Michael Lewis on May 11, 2021
Advertisement

When they heard that yet another study of long-closed Miami Marine Stadium lay ahead, restoration proponents questioned the need. But that study might be just what could help this long-awaited project actually succeed.

The latest city-ordered step, it seems, is a business plan for how the stadium on Virginia Key, once restored, could function without becoming a money pit perpetually filled with taxes.

The unique stadium long offered boat races and concerts until Hurricane Andrew battered it shut in 1992. But no races had been held since the 1980s and the stadium never paid its way – the city annually poured in millions. So the city had no incentive to reopen it, and after 1992 it sat and rotted.

Proponents had long sought restoration, so Mayor Tomás Regalado made that his top priority before his 2009 election. After studies and failed efforts, they wait still.

All efforts have focused on history and architecture and the joy of stadium events long past. They claim wonderful new uses – one study listed more than 50. Plans now include building beside the stadium a maritime center of uncertain size, use and cost to make the stadium economically viable in some unknown way.

Also in the mix is surrounding land that the city handed to the Miami International Boat Show, whose rent was to help pay for marine stadium operations. But the show recently returned to its former home in Miami Beach, leaving the city on the hook for tens of millions in land upgrades made for the boat show’s sole benefit. 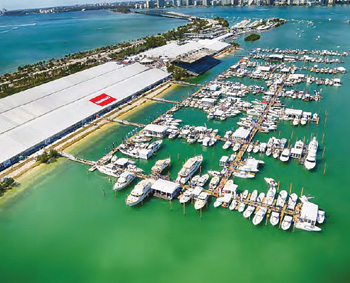 Save-the-stadium planning to date is like trying to grab a handful of Jello, all high-minded and community-spirited talk that has focused on the cost side – how much to restore the stadium and build a maritime facility – but has never come to grips with how to make it all pay off.

In November 2016 city voters agreed to borrow $45 million to restore the stadium, but one restoration proponent pointed out two weeks ago at city hall that paying off those bonds will probably cost $150 million. Where does that $150 million come from, and how much more will the city have to pay over 30 years to keep the stadium in good physical and fiscal shape? That question is not being asked, and no answers are floating around.

When the Virginia Key Advisory Board met at city hall two weeks ago, members grilled city staff on why one more study is needed. One staffer said the consultant would probe assumptions about stadium programming “from a business perspective” and “we don’t have the expertise in house.”

That is undoubtedly correct and gets to the core issue: we know the stadium can be restored, have a general idea of that cost, but still have no plan for who would operate or program it with what sorts of events and whether that site could ever make a profit or come close to breaking even, and what total costs taxpayers would have to bear.

Answers the city’s consultant needs are these:

1. Who would want to operate the marine stadium and for what kinds of events?

2. What kinds of deals do potential operators with solid track records in events propose today?

3. What might the City of Miami get in iron-clad guarantees and would those guarantees cover all operating and maintenance expenses and pay some or all borrowing costs to build?

4. What could the budget be as best-case and a worst-case scenarios?

5. Given all those numbers, would elected officials seek letters of intent from operators to move forward? If commissioners aren’t interested in that range of hard numbers there is no sense proceeding.

In fact, there is no sense going any further in restoring the stadium without all these answers. We have seen what happens when government says of a local stadium “build it and they will come,” the famous line in the “Field of Dreams” film. Dreams are for entrepreneurs with money in their pockets; governments need facts to support those dreams before proceeding.

When the Miami Marine Stadium was built in 1963 to seat 6,500 guests it was one of few concert venues in the area. Today, multiple venues here can handle that many guests. The stadium has a wonderful bay backdrop, but a site on the only road from the mainland to Key Biscayne with minimal parking is not ideal in other ways and is a sure source of friction with the island community.

While those involved in stadium restoration focus on costs and timetable – the city told the April meeting that construction would start late this year or early in 2022 – taxpayers deserve a 30-year plan to finance site use and restoration, upkeep, a new maritime facility and the surrounding land. They also need a letter of intent from an operator that answers questions about revenues to cover all costs, plus an agreement from the city commission to move forward with that plan.

So rather than being offended that the city seeks yet another study of the stadium, restoration proponents should hail a serious business proposal and seek a viable, financially supported way to finally get the job done with a venue that will actually be used and not just be rebuilt to rot once again.

These financial steps must precede any restoration. Get them moving now.