Advertisement
The Newspaper for the Future of Miami
Connect with us:
Front Page » Top Stories » Biscayne Bay water quality unsafe much of time, study finds

Written by Susan Danseyar on May 4, 2021
Advertisement 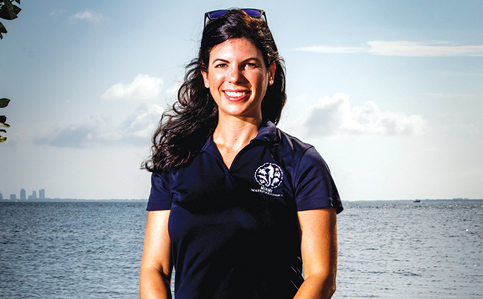 A water quality monitoring program for the City of Miami found that even the cleanest location being tested was below an acceptable rate for safe recreational use.

In April, Miami Waterkeeper completed weekly testing in the Miami River and along Biscayne Bay. The yearlong program that the non-profit conducted for the city for $50,000 was designed to expand monitoring of the body water that bumps against the city’s eastern boundary, going beyond levels that are taken at the county to better identify the source of fecal contamination.

The six sites tested were Miami Marine Stadium, Shake-a-Leg and Kennedy Park in Coconut Grove, Brickell Bay Drive, Jose Marti Park in Little Havana and Morningside Park. Of the 319 samples taken, 119 exceeded water quality standards, according to Executive Director and Waterkeeper Rachel Silverstein. She said the cleanest site was Share-a-Leg, which failed 20% of the time, and the dirtiest was Jose Marti Park, which failed 66% of the time.

There are a number of reasons why water samples indicate contamination, Ms. Silverstein said. “The biggest culprits are septic tanks, storm water runoff, sewage leaks and other kinds of dumping that might be going on,” she said. “There might be houseboats on the water with possibly illegal hook-ups.”

Health hazards for people coming in contact with contaminated water include gastro-intestinal complaints and infections.

Using the information gathered over the year, Ms. Silverstein said, there can be an investigation of what inputs are in the area including sewage and storm water pipes, and if there is a lot of flow in the water. “Over a year you get a good sense,” she said. “From there, if you see a wide divergence there might be areas you need to address to find out what might be contributing.”

However, Ms. Silverstein said, water is changing constantly. “A lot of times people want clear answers from one water monitoring result about what we can do to stop contamination,” she said. “It’s not cut and dried because water is dynamic.”

For now, Ms. she said, people can check water quality before going swimming or boating. “The goal of the study was to teach the public about levels of bacteria in the water,” she said. “The public should have access to water quality information and we put all the information on our website.”

Ms. Silverstein advises downloading the free swim guide app that will provide the latest information. “Look at the data frequently where there might be a risk and check before you go use the water.”

Miami Waterkeeper advocates for South Florida’s watershed and wildlife, and is involved in saving Biscayne Bay and its surrounding waters. Since 2010, the 501c3 non-profit has been focusing on issues including clean water, ecosystem protection and sea level rise readiness.