Advertisement
The Newspaper for the Future of Miami
Connect with us:
Front Page » Top Stories » Zoo Miami claws its way back from covid

Zoo Miami claws its way back from covid 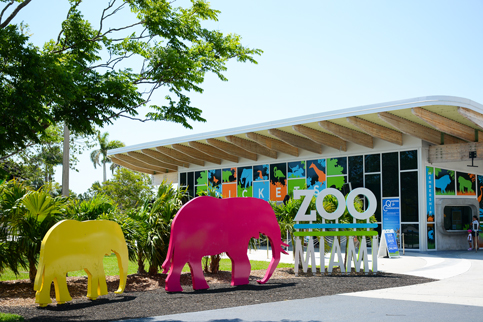 Some of Miami-Dade’s family-friendly animal-related attractions are seeing increasing crowds heading into summer, and staff say this could finally be the year that Zoo Miami hits the million-visitor mark.

County-owned Zoo Miami has seen large, though socially distanced, crowds since December and last month over 120,000 guests visited the zoo, topping March 2019 numbers, said Cindy Castelblanco, director of marketing and integrated communications for the Zoo Miami Foundation. The zoo still operates at 50% capacity as a covid precaution, she said, and on weekends tickets may sell out.

At the 66-year-old Miami Seaquarium, which welcomed guests for two or three days per week when it reopened last year, crowds have been steadily increasing and occasionally reaching capacity, according to spokesperson Alexa Login. Now, she said, the Virginia Key attraction is open five days a week and it might be open all seven after Memorial Day. While the park’s typical capacity is around 3,000 guests, she said, tickets are limited to a smaller group each day due to covid.

Both attractions are still observing safety precautions like requiring mask-wearing and social distancing and encouraging hand washing. They have also shifted a greater number of their ticket sales to online.

At the Seaquarium, Ms. Login said, guests can get 10% to 20% off tickets for purchasing them online, depending on the day. At Zoo Miami, Ms. Castelblanco said, the goal is for close to 100% of ticket sales to be online.

With capacity limits in place and demand so high, Mr. Castelblanco said, the zoo is cutting back on discount ticket promotions. But, she said, it will still launch the annual Summer Savings Pass on May 10, a partnership with the Seaquarium and Lion Country Safari in Loxahatchee in Palm Beach County that allows guests unlimited visits to all three parks for $59 for adults or $49 for children.

According to Ms. Login, the Seaquarium is offering K-12 educators free admission through Dec. 31 via an “Educator Pass” promotion that must be claimed by May 2. The effort, which is open to educators from Miami-Dade, Palm Beach and Broward counties, is meant as both a “thank you” to teachers and an initiative to showcase the park to those who may be planning future field trips.

When covid is eventually in the rearview mirror, Ms. Castelblanco said, the zoo’s virtual education efforts will probably continue, as they have become popular with parents and educators. Last year, she said “Zoocademy with (Communications Director) Ron Magill,” was launched, and “teachers love it.” The series, which features Mr. Magill, alongside the zoo’s many animals, is now being translated into Spanish.

The Zoo’s special events, Ms. Castelblanco said, have looked a little bit different this year, but they’ve still been very popular. For example, she said, the annual Easter-egg hunt, this year titled “Egg-Venture,” was a success. Instead of having children hunt for physical eggs, she said, 12 eggs were stationed around the zoo with QR codes, which hunters could scan and redeem for a prize.