Advertisement
The Newspaper for the Future of Miami
Connect with us:
Front Page » Profile » Dr. Rudolph Moise: A versatile president of Dade County Medical Association 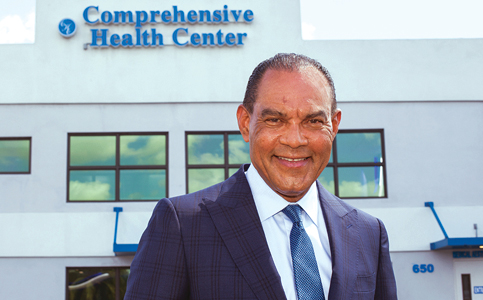 Dr. Rudolph “Rudy” Moise’s passion for learning may only be rivaled by a love of service. As a 17-year-old Haitian immigrant, he had to learn quickly to graduate from high school. He instead learned enough in one year to secure a scholarship and, later, a medical degree.

After serving for four years at a public clinic helping some of Miami’s most vulnerable residents to repay the scholarship, he bought a small practice from a retiring physician.

But he’d often be perplexed by his business’ balance sheet. While medical school taught him how to practice medicine, it gave students no business experience. He decided to go back to school

The University of Miami offered a weekend MBA program, which he attended for 2½ years. For his graduation project, he designed his ideal medical practice, an idea he then used to convince a bank to finance Comprehensive Health Center in North Miami.

Still, his continued studies revealed another expertise gap he had. He knew how practice medicine and steer his businesses successfully, but he still knew little of how to navigate the complex legal world around the medical profession.

“I thought, ‘I’m single. Instead of wasting my time gong to South Beach and partying, I should continue to invest in my education,’” he said. “I did that for three years, finished and passed the bar exam. I never practiced law. I did it for the education. The more you understand about legal issues in medicine, the better you can do for yourself and the community.”

His practice continued to grow. Recognizing that his success was made possible by the country that welcomed him years before, he decided to give back. He joined the US Air Force Reserve as a flight surgeon.

His four years of public service beforehand counted as active duty, so he enlisted as a major. In 2013, after 21 years of service, he retired a colonel. At the time, it was the highest rank attained by an American of Haitian descent.

He’s also a two-time candidate for Congress, a past chairman of the Jackson Health Foundation, the founder of the first full-time Creole-language radio station, a serial entrepreneur, and an actor in and producer of several feature films.

In September 2020, he became the first Haitian American president of the Dade County Medical Association (DCMA), an advocacy and support organization for physicians, their patients and staff.