Advertisement
The Newspaper for the Future of Miami
Connect with us:
Front Page » Transportation » Miami-Dade fights state on expressways authority 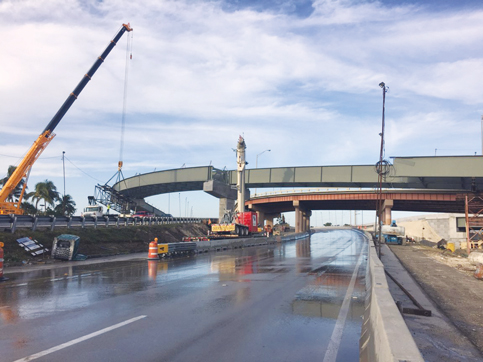 Miami-Dade’s fight against a Tallahassee power grab took a new form Tuesday, when commissioners advanced an item that would cite the county’s home rule powers in “abolishing” a state-created replacement of county tolling agency MDX.

The move marked the latest riposte in a series of back-and-forth actions between the county and state since mid-2019, when Gov. Ron DeSantis signed a bill dissolving and supplanting MDX with the Greater Miami Expressway Agency (GMX).

The new agency’s name is a misnomer; all five toll roads it aims to assume power over – the Gratigny Parkway (924) and Airport (112), Dolphin (836), Don Shula (874) and Snapper Creek expressways – exist solely in Miami-Dade, not Greater Miami, which also includes Broward and Palm Beach counties.

And because the bill applies only to Miami-Dade, opponents here say it violates a nearly 65-year-old section of the Florida Constitution granting the county self-governing protections from state laws that would target the county alone.

The Miami-Dade Home Rule Charter, which Florida voters approved in 1956 and county voters OK’d a year later, further grants the county powers to “abolish … authorities, boards or other governmental units whose jurisdiction lies wholly within Dade County,” regardless of which entity created them.

And that, Commissioner Joe Martinez told Miami Today, is what his item would do.

“This establishes our home rule charter,” he said. “The state does not have the right to create any law that singles out Miami-Dade on its own.”

The composition of GMX’s leadership structure is similar to that of MDX: a nine-member board comprised of four state appointees and five county appointees.

But the rules for GMX created through legislation by state Rep. Bryan Avila and Sen. Manny Diaz Jr., both from Miami-Dade, shift significant veto power over local decision on bond-funded projects on the tollways to the Florida Legislature’s budget commission.

Despite lacking the traditional percentage of members necessary – Miami-Dade has yet to make any appointments, leaving the group with more than half its seats empty – the new board’s four state-appointed members met April 9 to discuss the agency’s finances, projects and legal status following an appeals court’s rejection of MDX’s lawsuit against the state.

Eugene Stearns, the lawyer representing MDX in the case, told Miami Today he plans further legal action. The court threw out the case, he said, on a technicality that MDX wasn’t the correct entity to sue.

Mr. Stearns spoke in favor of Commissioner Martinez and Chairman Jose “Pepe” Diaz’s item Tuesday and called on other commissioners to support it. He recalled his time as a legislative assistant to former House Speaker Richard Pettigrew of Miami-Dade, who “did everything he could, as did other Dade County leaders,” to safeguard the county’s home rule rights.

“I would hope all of you would join together and say what has been said for the past 65 years: ‘Not on my watch,’” he said.

Commissioners voted 11-2 to advance the item to a public hearing and final vote May 4.

Asked if he worried the county’s fight with the state could jeopardize future state funding contributions toward transportation projects here, Mr. Martinez said that technically it already has, noting that the turmoil led three major bond-rating agencies to downgrade MDX bonds last year.

“I don’t know if the damage can be repaired [from the actions of the Florida Legislature] just so they could say, ‘We’re the big boys and girls in Tallahassee and we’re going to tell you what you have to do,’” he said. “Some of the people leading this charge want to run for county commission, [so] I guess we’ll find out. But there comes a time when you have to stand up and say, ‘I’m here.’”