Advertisement
The Newspaper for the Future of Miami
Connect with us:
Front Page » Real Estate » Public-private deal’s apartments downtown set to take tenants 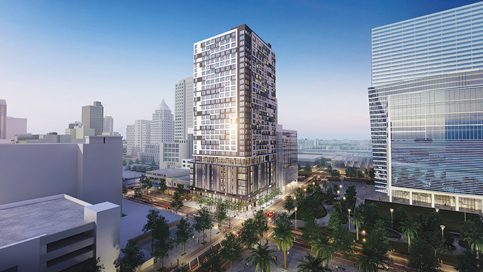 Grand Station Apartments, the product of a public-private partnership with the Miami Parking Authority (MPA), is ready to begin lining up tenants that will fill its 300 units.

ROVR Development has announced it has begun pre-leasing for Grand Station Apartments, a 30-story apartment tower in the heart of Downtown Miami.

Expected move-in will take place over the summer.

The $70 million development is a transformative public-private partnership with the MPA, bringing a combination of residential floorplans to MPA’s headquarters at 40 NW Third St. and expanding the existing garage at Courthouse Center with 350 new parking spaces.

Led by Principals Oscar Rodriguez and Ricardo Vadia, ROVR is developing the project, and Monument Real Estate Services, an A-Rod Corp Company, is the property manager.

For years, the undeveloped site at 240 N Miami Ave. was home to grass, sidewalks and small to mid-sized trees, and some mechanical equipment.

The city’s parking agency is run by the Off-Street Parking Board, which approved of the public-private partnership agreement with Grand Station Partners LLC.

Work began on the tower in June 2019 and has forged ahead even in the face of challenges brought on by the Covid-19 pandemic.

Alejandra “Alex” Argudin, MPA’s chief executive officer, said the project was on track to be completed during the second quarter of 2021.

In a statement marking the start of pre-leasing, Mr. Rodriguez said, “Downtown Miami was in immediate need of luxury housing that brought residents close to the city’s renowned amenities and transportation options that take them anywhere in South Florida.

“Working alongside the Miami Parking Authority, we were able to creatively use their existing space and enhance their own facilities, demonstrating the positive results that ultimately benefit residents when a public-private initiative such as this one takes place,” he said.

Mr. Vadia said, “The delivery of this project next to the region’s most important transit centers is an indicator of the possibilities that exist to improve Miami’s urban core.”

Government Center’s Metrorail, Metromover and bus hubs, as well as MiamiCentral, which features the tri-county rail service Brightline and will eventually include TriRail, are within a five-minute walk.

“It’s a convenient solution serving local office workers, Miami Dade College students and employees in the Health District, along with other members of our community,” said Mr. Vadia.

The tower is to have an expansive rooftop terrace, an outdoor kitchen with grilling area and an oversized swimming pool with sun deck and several hot tubs.