Advertisement
The Newspaper for the Future of Miami
Connect with us:
Front Page » Arts & Culture » Miami Film Festival entry focuses on taser death in Miami Beach 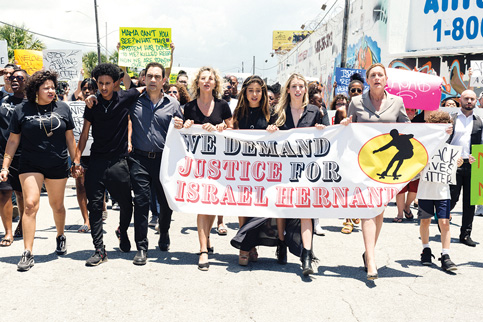 Premiering during a time of violent racial and social injustice tension in the US, the Miami Film Festival is set to screen “Reefa,” a film based on Israel “Reefa” Hernandez, an 18-year-old who was killed by the Miami Beach police in 2013.

Written and directed by Jessica Kavana Dornbusch and starring up-and-coming actor Tyler Dean Flores, Reefa follows the real-life story of Colombian immigrant and artist Israel “Reefa” Hernandez during his last summer in Miami, before being killed with a taser gun by a Miami Beach police officer in August 2013. His story left the local community outraged and the country reeling.

“This story really hit Miami and our community very hard,” said Jaie Laplante, Miami Film Festival and Miami Dade College’s Tower Theater Miami executive director. “I think the most important thing is that this story is not forgotten and is immortalized.”

Initially, Reefa was scheduled to premiere during last year’s Miami Film Festival, when suddenly all businesses were forced to shut down in March 2020 due to the pandemic. At 50% capacity, South Floridians will be among the first to screen the film at 6:45 p.m. Saturday, April 17, at Miami Dade College’s Tower Theater Miami at 1508 SW Eighth St., which will be followed by a Q&A with filmmaker Jessica Kavana Dornbusch and stars Mr. Flores, Clara McGregor and Pamela Longsword.

“When I first got the script, I really focused on who was Reefa as a person, what he wanted to accomplish and what he meant to his friends and family,” Mr. Flores said. “I realized we were very similar. I saw myself in Reefa in so many ways and grew up with kids just like him.”

Mr. Flores said he studied Reefa profoundly by watching videos of him, getting back on the skateboard to perfect his skating skills just like his character, listened to his favorite music and got advice from Reefa’s sister.

“Most importantly, I wanted to share light on Israel’s case, especially in his hometown,” Mr. Flores said, “but I also do hope people feel inspired by his creativity and how he bravely pursued his dreams no matter what obstacles were thrown his way.”