Advertisement
The Newspaper for the Future of Miami
Connect with us:
Front Page » Real Estate » Work to begin on Miami Beach’s tallest building 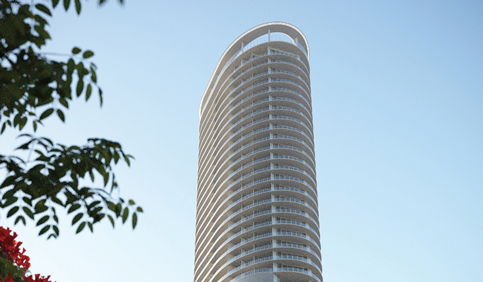 Terra, GFO Investments and New Valley plan to break ground this month on Five Park, a 48-story, roughly 280-unit tower at 500 Alton Road that will become the tallest building in Miami Beach at 519 feet upon completion in 2023.

Construction will be made possible by the largest residential construction loan in South Florida to be funded since the pandemic struck, $345 million from Blackstone and Apollo, according to a press release. This announcement follows news that Blackstone purchased office buildings last month at 2 and 3 Miami Central in Downtown and, Miami Downtown Development Authority Executive Director Christina Crespi said in December, plans to create 200 jobs for employees earning an average of $200,000 at their new tech hub.

“Miami Beach is well-positioned for long-term growth as a global gateway city, with continued demand coming from both foreign and domestic buyers,” said David Martin, CEO of Terra, in a release. “Five Park is poised to become the address of choice for the city’s newest residents, offering direct pedestrian access to Canopy Park and the Miami Beach Baywalk, panoramic views across the cityscape and Biscayne Bay, and best-in-market amenities.”

The building is designed by Arquitectonica, the Miami-based firm behind such Miami-Dade projects as Brickell City Center, Mr. C Miami in Coconut Grove and the upcoming Grand Hyatt Miami Beach Convention Center Hotel. Interiors will be designed by Gabellini Sheppard, who also worked on Grove Bay Condominiums in Miami.

The development includes construction of Canopy Park, a 3-acre public park between the 600 and 700 blocks of Alton Road that broke ground last July and is to include green space, pedestrian and bike paths, sustainable features, public art, an outdoor gym and a playspace for children.

The final phase of the project, “Miami Beach Canopy,” is to begin in 2022 and “encompass a signature pedestrian bridge spanning Fifth Street designed by internationally renowned artist Daniel Buren.”

“The Miami Beach Canopy – subtitled Walking Under, Along, and On the Colors: work in-situ by Daniel Buren – will complete the Miami Beach Baywalk, creating a safe and seamless connection running from South Pointe Park north to the Lincoln Road District and east to the beachfront,” the press release said.