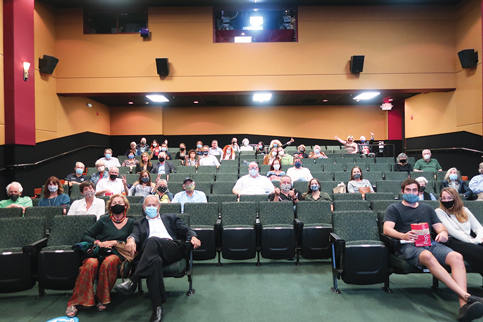 With social distanced automatic seating and ticketing protocols for each showing, several local theaters are reporting uptake of audiences, filling up showings at limited capacity.

Still under strict safety regulations, movie theaters throughout Miami-Dade are seeing an increase of moviegoers, who are feeling safer and more confident as the Covid-19 vaccinations continue to roll out.

With four locations throughout the county, CMX Cinemas’ CinéBistro and movie theaters have been adding more showtimes each month since initially opening several locations in September. Management is projecting a 35% increase of programing in the next 30 to 60 days because “the demand is there,” said Matt Russell, CMX’s vice president of operations.

Operating at 40% capacity at all locations, including at Brickell City Centre and CityPlace Doral, management projected a conservative audience number during the first quarter of 2021.

“Looking at the calendar by attendance we have beat out forecast for January, February and March,” Mr. Russell said. “We are hitting them all.”

With ticketing set to automatically social distance patrons until the showtime slot hits its capacity limit, Mr. Russell said weekend showings are selling out as people look to escape for a few hours and enjoy a movie night.

“Food and beverage is where we are making our money, still providing the dinner and movie experience,” he said.

After initially opening this past September, Coral Gables Art Cinema’s leadership decided to temporarily close the theater for a few weeks in January for interior renovations.

“We thought it was a good time to get certain projects done like installing brand new carpet,” said Javier Chavez, the cinema’s associate director.

“Considering the situation we are in now, in March we added more programing like films that are front runners for the Oscars,” Mr. Chavez said, “and I’m happy to say the audience has responded very well.”

Still experiencing a 65% decline in audience numbers compared to pre-covid, the operation at 260 Aragon Ave. can only fill the theater up to 70 of 141 seating capacity, at times capping out at 35 to 40 per showing.

“While making sure to keep our customers safe, the numbers are trending,” Mr. Chavez said.

Taking things a month at a time, the next big event is April 16’s annual Oscar week, which will feature all of the best picture nominees, he added.

After a year since closing its doors, O Cinema South Beach’s leadership decided to open March 19, right in the midst of the chaos of Spring Break incidents in Miami Beach, which forced city officials to declare a state of emergency and set an 8 p.m. curfew until April 12.

“This is just par for the course, always expecting the unexpected,” said Matt Walter, O Cinema’s senior manager and programmer. “We are really trying to focus on getting back in the groove of things while dealing with these external issues.”

Operating at 50% reduction, the cinema at 1130 Washington Ave. can only fill 35 of 70 seats per showing, Mr. Walter said. “Our virtual cinema has been helpful providing added income.”

On April 16, O Cinema will present Willy Wonka and the Chocolate Factory 50th Anniversary Screening at the North Beach Bandshell at 7275 Collins Ave., which is free for the public.

“Right now, we are just focusing on what we can do to expand,” Mr. Walter said, “and lure people back to the movies.”