Advertisement
The Newspaper for the Future of Miami
Connect with us:
Front Page » Real Estate » Mixed-use Wynwood buildings on Miami Avenue win OK 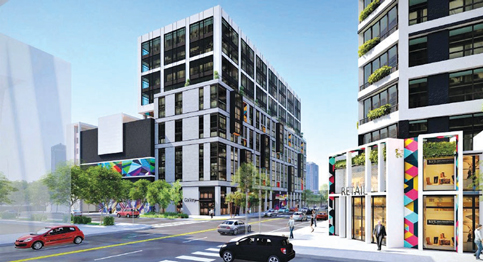 A sprawling mixed-use project designed to bring apartments, office space and more in two new buildings in Wynwood won a positive review from the city’s Urban Development Review Board.

The board unanimously recommended approval of the project, known as PRH N. MIAMI, after the developer made several changes to the plan in response to issues and concerns brought up by the review board and earlier by the Wynwood Design Review Committee.

The east parcel is to have retail at the ground level, a seven-level parking garage lined on the east façade with residential units up to the eighth level, and office space up to the 12th level.

The west parcel is to have retail at ground level, residential units up to the 12th level and amenity spaces for the residents.

Sandy Peaceman of CFE Architects went through many of the tweaks and changes made by the design team, with the goal of addressing the concerns of the Wynwood committee and the city board. Among them:

■Modifications include chamfered corner along the entire northeast corner of the west tower.

■The rooftop amenity deck has been redesigned to provide a more appealing lifestyle to the residents while creating a more intriguing skyline of the west tower.

■Artificial green wall has been removed from the west façade of the west tower.

■Faux brick has been removed from the ground level of the east tower and replaced with exposed concrete to create a more industrial feeling.

■Residential lobby and office lobby have been made more prominent and inviting.

■The long retail façade on 22nd Street has been broken down by stepping back a 33-foot-wide portion of the façade to be flush with the tower above. By doing so, it disrupts the perceived monotony along the retail wall.

■Round balconies have been removed from the tower at the main corner at North Miami Avenue and 22nd Street to emphasize the floor-to-ceiling glass corner.

■Garage screening and massing has been articulated with design elements that become part of the solution to the 60% roof covering requirements. Louvers have been provided where mechanical equipment will be utilized.

Board Chairman Willy Bermello and others commended the developer’s team for listening to the board’s concerns and making changes.

Board member Ligia Ines Labrada said she appreciates that the developer and architect acted upon board recommendations.

“It makes for a much stronger project. The open breezeway makes it more inviting … the scale and language has improved in relating the two buildings,” she said.

Board member Ignacio Permuy said: “If we had a category of Most Improved Project, this would be one of the top ones. I commend you on a job well done … exceptional job. Night and day.”