Advertisement
The Newspaper for the Future of Miami
Connect with us:
Front Page » Government » Commissioners divvy up spending of Marlins Stadium funds 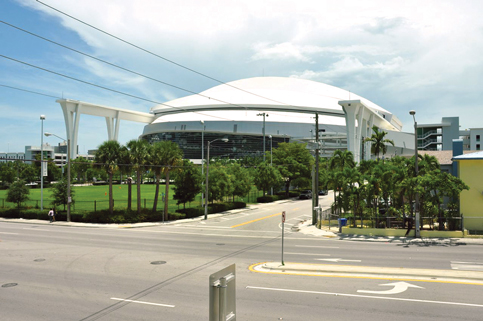 Miami-Dade commissioners will evenly split among their districts settlement funds the county got last month from a sale of the Miami Marlins, with funds to go toward covid relief, law enforcement and other local costs.

Each of the 13 commissioners will get $366,385 for pandemic-related costs, police, prisons and capital projects – construction, property purchases, building improvements, equipment and furniture – deemed to have public benefit.

Commissioners last week approved the plan by Kionne McGhee, who on Feb. 17 suggested they divvy up the county’s cut of $5.5 million former Marlins owner Jeffrey Loria agreed to pay to settle a dispute over profits from the $1.2 billion team sale in 2017.

Eileen Higgins joined Joe Martinez and Javier Souto, two of four commissioners who voted against accepting Mr. Loria’s offer instead of pursuing arbitration to get a larger settlement, in voting no on Mr. McGhee’s plan. Sally Heyman and Jean Monestime had also opposed settling.

Mayor Daniella Levine Cava had recommended during talks of the settlement last month that the money go to the county’s general fund to cover shortages in property tax revenues.

David Clodfelter, director of the county Office of Management and Budget, said Miami-Dade now expects to receive about $527 million from the $1.9 billion stimulus Congress passed this month.

“We’re of course waiting for US Treasury to provide us with guidelines, [but] there’s a category called ‘revenue recovery,’ which will allow us to cover certain revenue expenditure gaps,” he said.

Even so, it would be safer to save the county’s Marlins money to plug potential budget holes, Mr. Martinez said.

“I don’t know how next year’s going to come. I don’t think the federal government’s going to keep bailing us out, and I really don’t know how the economy’s going to turn,” he said. “It would be very prudent … to put it away for a rainy day [or] into a reserve [of our choosing], whether [for] housing – whatever it might be.”

Dispute over how much was due to the county and city from the Marlins sale stems from an agreement between the two governments and Mr. Loria in 2009 for construction of Marlins Park in Little Havana.

Miami-Dade taxpayers never voted on the deal, which passed 8-4 with Mr. Martinez, Ms. Heyman, Katy Sorenson and Carlos Giménez voting no, and included issuance of more than $500 million in bonds toward the ballpark. The Marlins agreed to contribute about $155 million without having to share revenue from ticket sales, naming rights, advertising and concessions.

The agreement included a stipulation that the county and city would together receive about 5% of net proceeds of a team sale if it occurred within six years of “substantial completion” of the park.

In February 2018, he cited an array of deductions and losses allowed in the stadium contract, including nearly $300 million in taxes, to support claims he sold the team at a $141 million loss to a group led by billionaire Bruce Sherman that included former Yankees player Derek Jeter and NBA great Michael Jordan.

As such, he said, he owned Miami-Dade and Miami nothing. The county sued two weeks later.