Advertisement
The Newspaper for the Future of Miami
Connect with us:
Front Page » Transportation » Melreese soccer development seen as airport safety threat 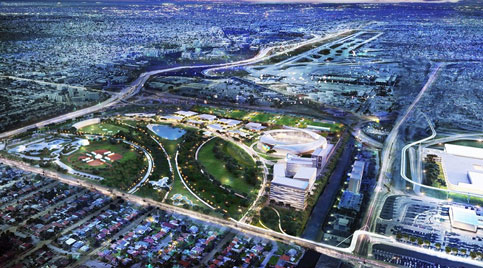 “We continue to work with the [developer] as information becomes available and will continue to keep this board apprised,” he told commissioners Tuesday.

Of eight buildings listed, four would violate height standards near MIA and could obstruct flights in and out of the longest runway, which serves heavy load and long-haul passenger aircrafts. The county got word the Beckham group will lower those buildings, but that information “has not yet been corroborated by the Aviation Department,” a memo from Mayor Daniella Levine Cava said.

Concern also exists over “large, luminous panels and glowing lights” and an “illuminated roof” at the stadium that could “create a significant hazard and practical difficulties” for pilots and air traffic controllers. “There may also be potential safety concerns and airspace conflicts with stadium “signage, fireworks” and “helicopters, blimps, drones and banner towers.”

During construction, cranes “considerably higher than the final structure” could lead to “flights being diverted to other runways, thus disrupting the [efficiency] and capacity of the airport…”

Danger from radio, electrical and navigational interference may arise and could only be fixed after development. Any such issues “would be resolved at the expense of the developer.”

Regarding traffic, more information than what was provided in a June 2019 report by county staff is needed, former Transportation Director Alice Bravo said.

Data used for the report, which focused solely on Melreese and its immediate surroundings, came from 2018, when the nearby 836 highway was undergoing construction. The report showed lower traffic counts at expressway ramps and near the Miami Intermodal Center than in historic state counts. A third of the 28 intersections in the study area are also close to capacity.

Any traffic impact that adversely affects access to MIA and other economic generators “would be a major factor” to consider in future administrative reviews and project approval processes, said county COO Jimmy Morales.

The project’s hotel element could draw customers from MIA “as there is little modern technology” at the airport’s existing hotel. That could be prevented, the report said, with development of up to two hotels now in MIA’s ongoing 15-year, $5 billion capital improvement program.

Rebeca Sosa, whose district contains MIA, made clear Tuesday she would not support the project as is. “This is going to become a real problem to MIA,” she said. “We cannot allow people to go to Broward County and use their airport over there because of the mess this could create.”