Advertisement
The Newspaper for the Future of Miami
Connect with us:
Front Page » Profile » Kionne McGhee: Commissioner seeks recognition of impact of South Dade 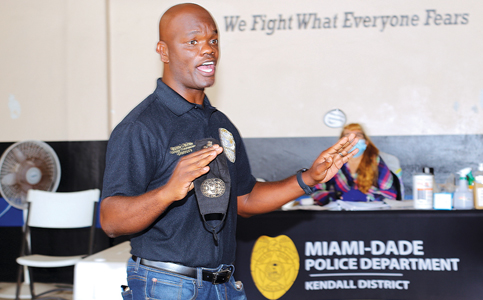 For Kionne McGhee, taking office last year as the county commissioner representing his home district in South Miami-Dade was a full-circle moment.

Nearly three decades ago, at age 15, he’d interned for Dennis Moss, the county commissioner whom he ultimately succeeded. And as the torch changed hands, he said, his old mentor repeated the advice he bestowed when they first met.

“He said that public service is an honorable way of life, a position that should be taken seriously, and that sacrifice and service are the prices we pay to occupy the space,” he said. “I use that philosophy when I make decisions that will benefit the community I serve.”

Prior to joining the Miami-Dade Commission, Mr. McGhee served for eight years in the Florida House of Representatives, the last two as minority leader. The overt optimism he brought to the job is now at the county dais, powered by four pillars – faith, family, flag and future – that have yet to steer him wrong.

“I use those guiding principles in every situation to determine whether or not an issue is important or a distraction. And thus far, while serving as a commissioner, I have yet to see a distraction,” he said. “My focus is so much on the people that it’s difficult to find distraction. To the contrary, I’m finding opportunities that haven’t been explored that we believe could benefit society as a whole.”

One Response to Kionne McGhee: Commissioner seeks recognition of impact of South Dade