Advertisement
The Newspaper for the Future of Miami
Connect with us:
Front Page » Top Stories » Historic Walgreens site to bustle with restaurants 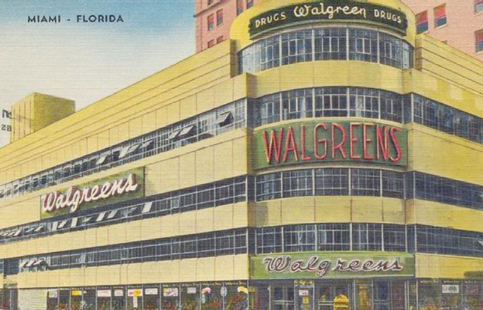 An historic and iconic building on a high-profile corner in downtown Miami is being reborn as a venue bustling with new restaurants and bars, and some office space.

The city’s Historic and Environmental Preservation Board has approved a special certificate of appropriateness for an addition and alterations to a property at 200 E Flagler St.

The property is a locally designated historic site known as the Walgreens Drug Store within the Downtown Miami Commercial Historic District.

Listed as an applicant for the project is Ricardo Hernandez, on behalf of Daniel Pena.

Attorney Javier F. Aviñó, representing the owner-developer, wrote to the city: “As now envisioned by the Applicant, the Walgreen Drug Store will be reimagined as home to an innovative mix of new restaurants, bars, and office space to be known as ‘Julia & Henry’s.’ The establishment’s name honors Julia Tuttle and Henry Flagler, widely considered the mother and father of Miami.”

The requested special certificate of appropriateness would allow the redevelopment of the building, including alterations, an addition, and signage.

Mr. Aviñó said the scope includes a new bar and banquet/event space in the basement and varied food and beverage tenants in the ground, mezzanine, and balcony levels (the ‘Food Hall’), including nationally and internationally recognized chefs. The second and third levels are to provide office space for diverse tenants.

The city’s preservation office staff concluded the application has demonstrated compliance with Chapter 23 of the city code and the Secretary of the Interior’s Standards.

That report noted: “Staff finds the request complies with all applicable criteria and finds that the request for a Special Certificate of Appropriateness for an addition and alterations does not adversely affect the historic, architectural, or aesthetic character of the subject structure or the aesthetic interest or value of the historic district” subject to several conditions.

The structure, built in 1936, has a rich history in the growth of Miami.

The historic building is a five-story structure with a subterranean basement, totaling 46,912 square feet of mixed-use space at the corner of East Flagler Street and Northeast Second Avenue, one of the most prominent intersections in Miami’s urban core.

Mr. Aviñó’s letter notes: “The existing building is a masonry structure designed by architects Zimmerman, Saxe and MacBride with E. A. Ehmann as associate architect. The structure’s Streamline Moderne style of architecture accommodated Miami’s climate and the building’s location through the use of horizontal bands of ribbon windows and a curved corner entrance.”

As noted in the 1988 Historic Site Designation Report, the Walgreen Drug Store is one of the earliest and most representative Streamline Moderne buildings in Miami with a visual composition that makes it an exceptionally unique commercial structure, he said.

“The building also represents the accelerated commercial development of Downtown Miami that took place between the World Wars. The Walgreen Drug Store building was locally historically designated in 1988 and was listed in the National Register of Historic Places the following year,” wrote Mr. Aviñó.

The building has been repurposed several times, including use as a Sports Authority store, and la época clothing store.

Also, the neighborhood surrounding the building has seen incredible change since the building’s construction, with an even more rapid evolution of the Downtown Miami area over the past decade, he said.

Residential and office towers have created an increasingly dense and populated downtown, driving demand for walkable streets dotted with restaurants, bars, and similar opportunities for socializing and community gathering, according to Mr. Aviñó.

He said the applicant will maintain ownership of the property and will lead the redevelopment of the entire building. A management agreement, he said, will be put in place under which a master operator, to be selected by the applicant, will manage all spaces and tenants within the building, with the exception of the basement bar, which will be operated independently and will obtain its own liquor license.

The 9,120-square-foot basement is to include an Al Capone inspired speakeasy bar with 3,143 square feet, to be known as “JOLENE.”

The remainder of the basement is to be a banquet and event space with a production area for the Food Hall tenants in addition to a commercial kitchen that can be leased by professionals within the food and film industries.

Mr. Aviñó wrote: “The Food Hall includes three bars with seating around each venue (to be covered under the same liquor license obtained by the Applicant), three commercial retailers, and approximately 26 individual tenants. The individual tenants will have their own seating areas and will not sell alcohol.

“At the ground floor, four different tenants will be located next to the existing windows, with the goal of creating four ‘ventanitas’ through which sales can be made to customers outside the building, cultivating an activated façade that engages the public.”

The second and third floors will consist of 17,568 square feet of shared office space able to accommodate up to 300 individual co-working tenants.

The fourth level consists of 8,220 square feet with a 6,344 square-foot rooftop addition that will house a high-end restaurant, bar and lounge.

Christine Rupp, executive director of the Dade Heritage Trust, appeared before the preservation board and expressed the trust’s support “of this beautiful adaptive reuse” in an area of downtown with a “rich architectural heritage.”

The unanimous board vote to grant the certificate of appropriateness comes with conditions:

■The site shall be developed in accordance with the plans as prepared by TAI Architecture LLC.

■All glass shall be clear with the option of Low-E.

■The applicant shall comply with the requirements of all applicable departments/agencies as part of the City of Miami building permit submittal process.

■The rooftop addition shall be set back from the edge of the building.

■Approval of the Special Certificate of Appropriateness does not waive zoning’s requirements on signs.

■The proposed signs shall utilize existing mounting apparatus whenever possible.

■All signs shall be either reverse lit, neon, or by an external source.