Advertisement
The Newspaper for the Future of Miami
Connect with us:
Front Page » Business & Finance » 7-acre Plaza Coral Gables sprints to finish line 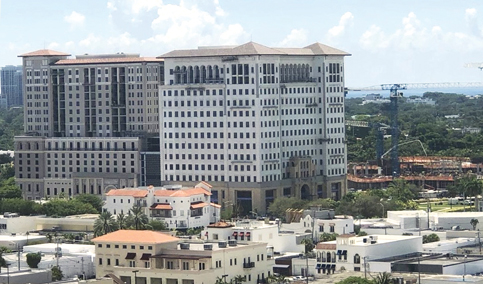 Despite hurdles and challenges presented by the pandemic, construction at The Plaza Coral Gables remains on schedule to meet its August 2022 completion goal.

The residential building, The Reserve at The Plaza at 122 Sevilla Ave., is now home to about 30 families. The North Tower office building, which is fully operational, has now become the new headquarters for Agave Holdings, along with several other office tenants starting on interior improvements. On the retail side, tenants are in the planning and permitting process, according to a Feb. 8 report from Agave.

“We are working with 14 or 15 different restaurant concepts first and the rest will fall in place,” said Michael Finkle, Koniver Stern’s managing director and head of retail space leasing. “We have a pretty exciting lineup and trying to put a good spectrum of moderate to upper-moderate priced restaurants because Coral Gables is a family-oriented market, and we want to make sure it’s affordable and accessible to those families.”

Still in the early stages, one of those concepts that has already signed on is dining and entertainment venue Pinstripes, which is to occupy 30,000 square feet of the Plaza across two levels and features a bistro, bocce courts and bowling lanes. Fogo de Chão steakhouse also plans to open a flagship location at the Plaza, which will include a butchery and cigar bar.

Retail leasing is at 30% capacity with more announcements coming in the next few months, Mr. Finkle said.

Agave is really partnering with tenants by creating high-quality, first-rate finishes and developments, with end-to-end covered outdoor areas, more than 2,100 parking spaces, and streetscaping and lighting installations from Miracle Mile to the Plaza, Mr. Finkle added.

“The Plaza is part of Coral Gables’ core with tremendous and fantastic activities, beautiful landscape environment and water features that will really connect with the community,” Ms. Blanca said.