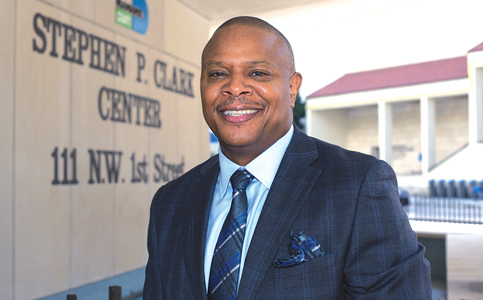 For Morris Copeland, chief community services officer for Miami-Dade, the goal was always to serve his hometown.

He grew up in Liberty City and was a young teen when riots shook Miami in 1980. The experience was life changing, he said, and after graduating from high school, he accepted an out-of-state college football scholarship.

“It was like living in a different world,” he said. “I grew and met people I normally wouldn’t have had the chance to talk to and gained a great deal of knowledge and experience there, being part of leadership in student government and my fraternity, learning more about myself as an individual and feeling I needed to do something to help those young men who are left behind, whose lives did not turn out as positively as mine.”

The corporate world offered him jobs, he said, but the prospect of working solely for profit had little appeal. Instead, he joined the Miami-Dade Juvenile Services Department in 1989, leading group treatment at a halfway house for teens.

That role led to many others through 2007, when he became deputy director of the department. Within four years, the “deputy” part of the title was gone.

“The mayor gave me this opportunity to expand my philosophy, which coincides with hers about being compassionate by being caring, connected and about equity,” he said. “I work, learn and share my experience with some dynamic leaders under this portfolio.”