Advertisement
The Newspaper for the Future of Miami
Connect with us:
Front Page » Top Stories » More FPL solar ‘trees’ in parks producing energy 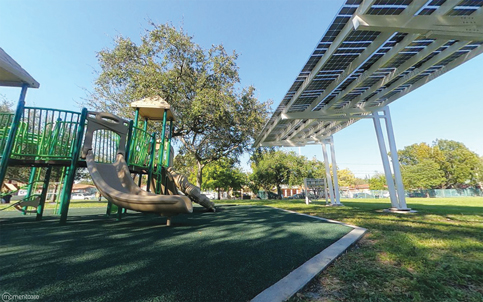 Four new solar trees and canopies have been unveiled this year in Miami-Dade and Broward as part of Florida Power & Light’s SolarNow program.

These canopies and trees, the company’s website says, “provide shade and harness the power of the sun while generating emissions-free energy” which is fed back into the “grid.”

“Each Solar Tree,” the website says, “is capable of producing up to 3 kilowatts of solar energy – enough to power an electric vehicle 15,000 miles per year.” Canopies, it said, can produce enough clean energy in a year to “power the needs of 197 electric vehicles, 12 coffee shops or 600 classrooms” and “help remove 438,000 pounds of carbon dioxide emissions to reduce pollution.”

The program, it says, is funded by customers who opt to pay an extra $9 per month to support the development of solar energy sites.

In total, the website says, there are 100 SolarNow trees and canopies across Florida including 60 at public places like parks, zoos and museums. Over 20 locations, a press release said, are in Miami-Dade or Broward.

The 2021 additions include two solar trees at Morgan Levy Park in Doral, one solar canopy at Melrose Park and two at Moore Park in Miami, and one canopy at Reverend Samuel Delevoe Memorial Park in Fort Lauderdale. This location is one example of the canopies’ multifaceted purpose, as the structure at Delevoe shades the facility’s fitness area in addition to producing solar energy.

Some structures, the release said, are also outfitted with charging stations for electronics.

A new feature coming to SolarNow locations at Frost Science Museum, Zoo Miami and Museum of Discovery and Science in Fort Lauderdale will also allow visitors to activate an “augmented reality” experience on their phones intended to appeal to children.

“How solar technology works can be a little bit of a difficult concept, but having an animated solar tree teach it with augmented reality – cutting edge tech – is something that we hope kids will understand because it’s fun and easy,” said Angela Cruz Ledford, a spokesperson for the company.