Advertisement
The Newspaper for the Future of Miami
Connect with us:
Front Page » Government » At-home Covid-19 test recommendation months late 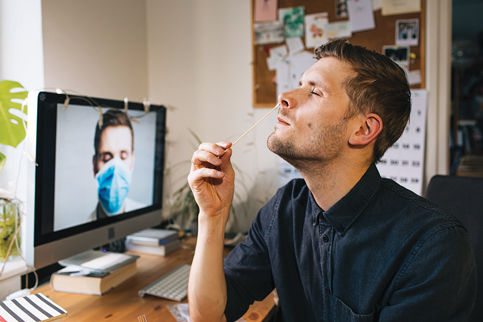 Despite having a “difficult” time talking with the maker of an at-home Covid-19 test kit being considered for residents, Miami-Dade staff hope this week to have enough information to advise county commissioners on next steps.

A report with recommendations on whether to use the test here, how much it would cost and where the money to pay for it would come from was due Jan. 15.

A month and a half later, the report still isn’t in from the Office of Emergency Management, which is “aiming for some time in the next several days” to submit its findings to commissioners, county spokesperson Rachel Johnson said by email.

The Office of Emergency Management “reports that it has been difficult communicating directly with the company specifically identified in the directive,” she told Miami Today by email.

While the Lucira kit was the first rapid-result Covid-19 test available for home use, it’s just one of several Miami-Dade could use to significantly broaden its testing provisions.

The US Food and Drug Administration (FDA) in November issued an emergency use authorization for the Lucira test, which works much like in-lab tests, where a person swabs the inside of both nostrils with what looks like a long Q-tip, swirls the swab in a vial and then places it in a test kit that will show highly accurate results within 30 minutes.

At the time, Lucira Health, based in Emeryville, CA, said that it planned to make the test available in Florida and California first and then throughout the US by spring for $50 per kit.

To use the test, a person must get a prescription and be 14 or older.

But on Dec. 15, the same day Miami-Dade commissioners unanimously OK’d a resolution by Danielle Cohen Higgins directing staff to look into using the test here, the FDA authorized the emergency use of a second home test by Australian manufacturer Ellume.

Unlike the Lucira test, the FDA cleared the Ellume test for use without a prescription. Ellume said the test will cost about $30 and be available in the US in the first half of 2021. It takes 15 minutes for the kit to produce results, the company said.

One day later, Chicago-based manufacturer Abbot Laboratories’ BinaxNow test received FDA clearance as well. Like the Lucira test, a person must first get a prescription and be 15 or older.

The Ellume test, which has shown to be 96% accurate in correctly detecting positive Covid-19 cases – the most accurate of the three tests – got a significant boost last month, when President Joe Biden’s administration signed a $231.8 million contract with the company to speed production. The contract includes opening a US manufacturing facility, where the company is expected to produce 19 million tests per month, of which 8.5 million will go to the federal government.

As of January, the FDA has authorized 309 test and sample collection devices, according to Dr. Stephen Hahn, then the US commissioner of Food and Drugs.

The FDA on Monday authorized yet another home test for emergency use by San Diego manufacturer Quidel.
“The test is authorized for individuals suspected of Covid-19 by their healthcare provider within the first six days of symptom onset,” an FDA press note said.

Ms. Cohen Higgins, who joined the county commission Dec. 7, said she looks forward to reading the report she and her peers ordered from county staff and getting tests to those who need them.

“Residents deserve as many no-cost Covid testing options as possible to help combat this pandemic,” she said by text. “That is why this was my first priority as when I took office. We, as a county, should lead in offering this kind of innovation to our residents.”