Advertisement
The Newspaper for the Future of Miami
Connect with us:
Front Page » Communities » Miami starts celebrating 125th birthday 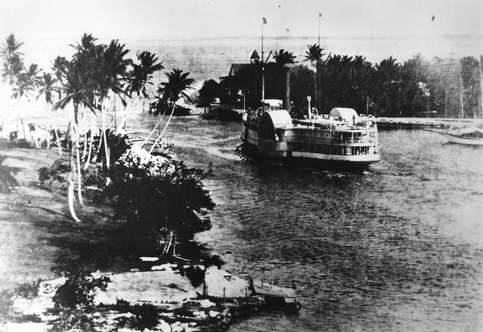 At a press conference on the steps of Miami Senior High School, the City of Miami announced this month the beginning of a countdown leading up to the 125th anniversary of its incorporation on July 28, 1896. The six-month celebration is co-chaired by Mayor Francis Suarez and Larry Gautier, senior vice president at NAI Miami, who is a direct descendent of one of the city’s founding families.

“Miami is a young city in the big scheme of things,” Mayor Suarez said in a prepared statement, “but we have made so much history here in our nearly 125 years, and we aim to celebrate our rich past in the coming months… This is an opportunity for Miamians of all ages to learn about our history – and to envision what our city will look like in the years and decades to come.”

Details of specific events are still on the drawing board due to pandemic-related uncertainties, but coordinators say they will be designed to honor the past and embrace the future.

Mr. Gautier said the city will host monthly educational events via Zoom in neighborhoods throughout Miami where markers are being installed to commemorate significant historical sites.

“We plan a large education piece,” he said. “We will partner with local schools where students will learn about their hometown’s past and be asked to share their thoughts and aspirations for what Miami’s future will look like.

“My hope is that this celebration will give our youngest residents a sense of Miami’s past and a real sense of place to activate future community involvement here.”

A student competition to design the 125th Anniversary commemorative logo is also under consideration, as is a community gala at Bayfront Park in late July, contingent on Covid-19 conditions.

In an interview in 1896 cited by Arva Moore Parks in “Miami the Magic City,” Miami pioneer Julia Tuttle predicted that “it will not be many years hence before Miami will be the most important port on the Atlantic coast in the South … Vessels from all parts of the world will call at Miami, making Miami the greatest commercial center in all the southland.”

It’s unlikely that many of the new city’s citizens shared her optimism.

“When my great-grandparents arrived at the mouth of the Miami River on a flatboat in 1895,” Mr. Gautier said, “they couldn’t have imagined what that place would become.

“They were one of 10 families Flagler sent down from West Palm Beach to get things organized, and my great-grandfather, T.N. Gautier, jumped at the opportunity. He opened one of the first general stores, at Flagler Street and Miami Avenue, and was part of group that signed to incorporate the City of Miami on July 28, 1896.”

Paul George, resident historian at HistoryMiami Museum, said during the past 125 years “Miami has seen astronomical changes – not only its population explosion but also cultural and ethnical.”

The population at incorporation, he said, was about 700 people, based around a Deep South demographic and a lot of Bahamians who came here to work.

“It was basically a frontier town,” Dr. George said. “But it grew up quickly. By the end of the 1910s the population was close to 40,000, and it had the fastest growth rate in the nation.”

Today the population of the city is about 470,000 he said; 2.73 million people call Miami-Dade County home.

Dr. George attributes the city’s resilience, in the wake of several real estate booms, the Great Depression and other disasters both manmade and natural, to its ability to reinvent itself,

Even now, he said, the city is ever-changing.

“Old neighborhoods have been resuscitated,” Dr. George said. “Art deco has gone crazy. Brickell came out of nowhere to become a very exciting place to be. Recently there are reports of a trend of famous people moving to Miami, which is not as constrained as Los Angeles or New York.

“The city has long been a place for starting over again. That’s what I find really fascinating about Greater Miami.”