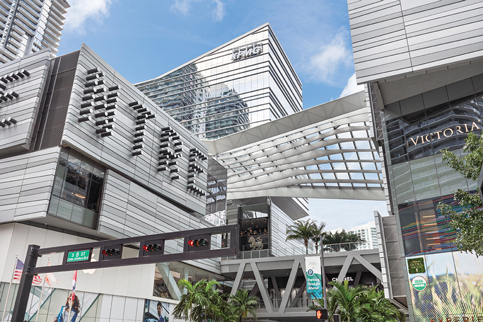 Like every other business in the hospitality and tourism industry, The Shops at Brickell City Centre felt the effects of the pandemic, but managed to power through and keep businesses intact.

Still being a relatively new lifestyle commercial center, Brickell City Centre at 701 S Miami Ave. continued to finalize the leasing of initial first-generation spaces when the momentum was shut down for about six months back in March, said David Martin, the center’s retail vice president.

“We have picked up from where we left off and carried it into 2021,” he said. “We are in a positive space right now and generally optimistic for this year.”

The phase one 9.1-acre urban mixed-use development, which is about 93% leased, saw a 48% decreased in retail sales during the first half of 2020, with no sales reported from the second half of March through the end of May while the mall was closed due to Covid-19, according to operators Swire Properties’ 2020 interim report.

Located in the shops, CMX Cinemas felt the pandemic’s wrath and filed for Chapter 11 bankruptcy in 2020. The cinema was able to negotiate and strike a deal with Swire Properties where a portion of the sales goes towards leasing payments.

“We were able to reach a deal with them [CMX Cinemas] to reopen and I feel that was the right thing to do. The cinema was successful before Covid-19 and will come out just as strong,” Mr. Martin said.

CMX Stone Sports Bar is currently open with special brunch menus, along with the support from sports fans throughout the year, he said.

“Right now, no exciting movies are coming out, with most blockbuster films delaying their premieres. I’m very comfortable when those big-budget movies come back, people are going to come out, it will just take some time,” Mr. Martin added.

The new concepts that will join recent newcomers to The Shops at Brickell City Centre, such as Lucid Motors, Marabu and Est. 33 includes Solea Beauty Lounge, a local go-to for all medical spa needs, and Cabana, a multi-brand shop dedicated to cultivating fashion. In March, shoppers can expect the opening of Indochino menswear, and Forward preventive primary care will start taking patients in May.

“In general, I can say traffic and sales started to bounce back during last year’s holiday season, which has been definitely stronger than what we expected,” Mr. Martin said. “People want to get out, socialize and feel safe.”

From a marketing and programming standpoint, management is bringing back programming but at a smaller scale, said Michael Sneed, Brickell City Centre’s director of retail marketing.

“We are looking in partnering with smaller groups wanting to host social distance events like luxury dinners, and really cater to our retailers’ needs,” he said. “We are repurposing our events structure and got our eye into the fourth quarter of 2021, bringing the holidays in a bigger but safer way.”