Advertisement
The Newspaper for the Future of Miami
Connect with us:
Front Page » Opinion » Two railway lines may roll downtown with new objectives

Today’s front page news that two vital rail lines may serve downtown in 2021 follows years of pledges that trains were about to run here or there in Miami-Dade. We’ve had more false promises of added railways than of tax cuts.

Nonetheless, we should welcome news of resumed Brightline service and new-to-downtown Tri-Rail for both transportation and economic stimulus. As we recruit firms and residents from high-tax northern states, for example, we see that commuter rail like they now ride may be necessary to lure them here.

The return this year of Brightline is the more likely of the two pledges to be met on time. The service – born as All Aboard Florida, renamed Brightline, then destined to become Virgin Rail, and now again just Brightline – was already running when covid shut it down.

When Brightline began to develop about a decade ago it was to run at high speed from Miami to Disney World with just two other stops, Fort Lauderdale and Palm Beach. It was to be a luxury trip primarily for tourists.

But as its name changed, Brightline aims shifted to link only three South Florida counties for now. Runs halted almost a year ago as Covid-19 took hold, but operators now plan a fall comeback once the line passes operating safety tests that became required just this year.

The other service, Tri-Rail, is well established: in 2019 it was the 14th most ridden commuter rail in the US, carrying 4.5 million people – 14,800 per average weekday – along a 71-mile route with 18 stations. But it has never reached downtown Miami. Its southern end now is at Miami International Airport station, too far away for the central business district’s 100,000-plus workers. 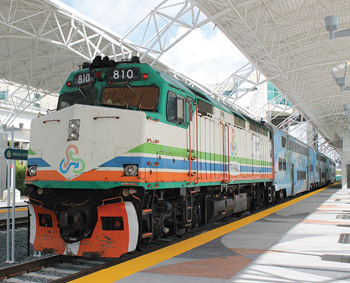 Early estimates were that a Tri-Rail station in downtown Miami would add 2,000 riders daily to start, far from the 385,400 carried daily in 2019 by the nation’s busiest commuter line, the MTA Long Island Rail Road, but a big gain for us.

Plans for seven years have been for Tri-Rail to share Brightline’s tracks and its downtown station. But first Brightline had to open, once due in 2014 but a bit late. Now the plan is for Tri-Rail to pull into downtown after it passes the same operating safety tests as Brightline. That might come six months after Brightline finishes tests and rolls again, taking it into next year.

If Miami’s original railroad had met similar delays, this might be a village today with the nearest real city in Key West, as was the case in 1895 when a land deal was the making of today’s Miami.

At the time, the way to reach Miami was by boat. Then in 1895, rail baron Henry Flagler received half of Julia Tuttle’s land allotment here and 100 acres more, plus 100 acres from the Brickell family, to bring his Florida East Coast Railway south from Palm Beach to the heart of what is now downtown – there wasn’t even a city here then. He cut the deal in April 1895 and in April 1896, just a year later, the first passenger train pulled in.

Imagine laying a railway through wilderness for 71 miles with the day’s primitive construction equipment when Florida panthers and other wildlife roamed the route.

That railroad made Miami first a city in July 1896, then a haven for winter visitors and a regional hub for transportation as agriculture burgeoned south of the city. The trains hauled to the north the produce we grew, making us the nation’s source of winter fruits and vegetables.

Tracks on which Tri-Rail is to pull into downtown follow Flagler’s route and are owned by his firm’s successors, who own Brightline.

Nobody is suggesting Tri-Rail could transform Miami as Flagler’s line did in frontier times. Nor is there certainty that just because Tri-Rail runs, seats will fill. We remain in a pandemic. Even with health precautions, concern is real about entering a closed, crowded space. We have no idea when that concern will abate.

Beyond that, in the past year commuters have been teleworking and all won’t return to desks when they get a health all-clear. Too many former commuters also have joined the unemployed. When they will come back is also unknown.

Tri-Rail had been growing, with ridership up 30% from 2005 to 2014. But even before the pandemic, questions swirled around commuter transit.

While commuter rail use nationally grew 4% from 2017 to 2019, use of Metrorail, the comparable service within Miami-Dade County, was plunging well before the pandemic. From fiscal 2017 to 2020, Metrorail rides fell from nearly 20 million a year to fewer than 12 million.

Perhaps with focused marketing Tri-Rail would be ridden heavily throughout the day and even weekends – the line now is aggressively marketing weekend use – rather than overflow in morning and evening rush hours and lure few riders otherwise.

Staggered office hours might in the future make that more probable than in the past. Such a shift would be a welcome legacy of the pandemic.

Another legacy: many families have shed second cars as the pandemic has limited mobility and they may not go back to being two-car families.

Certainly, transportation planners can discard any pre-pandemic projections. Lives and working environments have changed as we never imagined.

For one thing, downtown Miami offices are now more than 20% vacant and more companies will downsize as leases expire.

On the other hand, more companies from the North will move into downtown and many workers will follow. These firms may be smaller but more nimble, each using less office space but comprising as a group even more square feet. The ground is shifting quickly.

Both Brightline and Tri-Rail will be far more than welcome downtown. We need them just as much as in pre-pandemic days. But they may serve us following a different game plan and timetable than was anticipated just a year ago.

Still, it’s well past time for downtown to again holler All Aboard.