Advertisement
The Newspaper for the Future of Miami
Connect with us:
Front Page » Transportation » Signature Bridge rising in downtown Miami 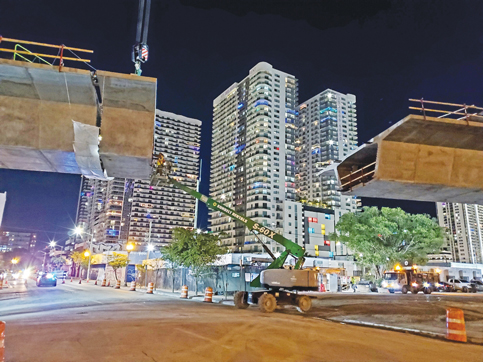 The Signature Bridge is rising.

Prefabricated segments of what promises to be an iconic highway bridge in downtown Miami are being placed by construction crews as the I-395/SR 836/I-95 Design-Build Project continues to progress.

The massive $818 million project is the product of a partnership between the Florida Department of Transportation (FDOT) and the Miami-Dade Expressway Authority and its contractor, the Archer Western – de Moya Group Joint Venture.

The project includes the Signature Bridge over Northeast Second Avenue and Biscayne Boulevard, an upper deck of traffic built over SR 836 and the Miami River, and the addition of one lane to the northbound entrance to I-95.

One crew is working adjacent to Northwest Miami Court and Northwest 13th Street on the future westbound I-395 collector distributor roadway that will allow access to I-95 and local roadways, he said.

“This crew is moving westward with segment erection currently being done with massive cranes. Once the crew reaches the rail facilities that service the Brightline trains, a specialized segment lifter will be utilized to erect the segments over the railway,” Mr. Gonzalez wrote.

The second segmental crew is working on the eastbound collector distributor roadway just east of Northwest Third Avenue and south of the existing I-395. Both crews have erected about 306 segments so far.

Mr. Gonzalez said foundation and pier construction is also underway along the I-395 corridor with two crews working on Auger Cast Piles (ACP).

ACP operations have been completed on three of the four signature bridge arches and the center pier foundation that will be constructed during this phase.

One ACP crew is working on the fourth signature bridge arch adjacent to Northeast 13th Street and the North Bayshore Ramp to the MacArthur Causeway.

These four arches will support the westbound lanes of the Signature Bridge.

The two remaining arches and the eastbound section of the Signature Bridge will be constructed at another phase with completion of the bridge expected in fall 2024, according to Mr. Gonzalez.

He said the second ACP crew is working on installing the ACPs for the eastbound collector roadway near Northwest Miami Court, south of I-395. About 704 ACPs have been installed along the I-395 corridor.

On Friday morning, Feb. 19, the right lane on the westbound I-395 ramp to northbound I-95 will be closed from just east of the ramp entrance to where the ramp merges to one lane. The closure will allow the contractor to remove sections of the ramp to begin the foundations for the permanent ramp.

Mr. Gonzalez wrote, “Construction is advancing for the new SR 836 double-decked roadway that will allow for a direct connection from SR 836 to the MacArthur Causeway reducing weaving movements due to through traffic mixing with traffic exiting/entering local roadways.

“The existing SR 836 roadway (lower level) will be the collector distributor roadway that will allow access to/from local roadways and I-95. Work on footers, piers and the casting of bridge caps is ongoing day and night.”

He said footer construction is ongoing in parking adjacent to the Richard E. Gerstein Justice Building. The contractor is also working on footer and pier construction in the median of SR 836 just east of Northwest 17th Avenue.

A casting yard near the SR 826/SR 836 interchange is producing the bridge cap segments that weigh up to 90 tons each.

Four cap segments will be attached to each pier. Erection of bridge caps is expected to begin in late March/early April west of Northwest 17th Avenue and continue eastward.

A beam lifter, specifically designed and constructed for this project, will be used to erect the caps and then the bridge beams that will eventually support the double-decked roadway.

Widening for the eastbound SR 836 ramp to northbound I-95 is ongoing. Construction of the bridge piers and caps is complete and nighttime erection of the steel bridge beams began in early February.

The ramp is being closed overnight to allow safe installation of the bridge beams.

Drivers on SR 836 should anticipate nighttime lane closures on the mainline as well as adjacent ramps and arterial roadways under SR 836.

Concrete replacement on I-95 was advanced about four weeks during periods of lower traffic.

Concrete is being replaced from Northwest Eighth Street to Northwest 29th Street and is 90% done.

The contractor is also replacing the bridge approach slabs along the project limits. The remaining concrete work is expected to be completed by the end of March.