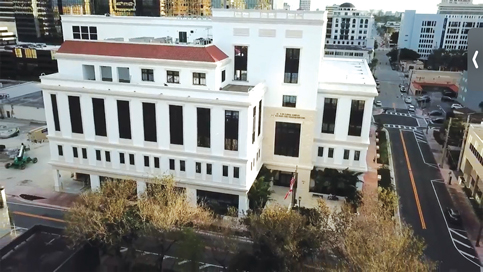 The City of Coral Gables has inaugurated its new, state-of-the-art public safety building, which is the new headquarters for the city’s police and fire departments.

The 200,000-square-foot public safety building is also the home of the Emergency Operations Command Center, Fire Station 1, the 911 call center and first responders dispatch center, and the city’s communications and Information technology departments.

This facility also ensures law enforcement officers and firefighters have the highest quality facilities, training and response technology with simulation training centers on the top floors, the city manager said.

“We are kicking off 2021 in our new home from which our officers, communications operators and support staff will continue to protect and serve the Coral Gables community,” said Police Chief Edward J. Hudak Jr. “This new technology and having all of these departments at one building is going to help us gather even more information from different sources, which will make our officers respond even faster than before.”

During an emergency operation, like a hurricane, the new public safety building becomes a centralized divisional emergency center for cities that are close by, the police chief said. Those cities include South Miami, West Miami, Pinecrest, Palmetto Bay, Sweetwater and the University of Miami as well.

“It’s not often you get a chance to be part of Coral Gables history because this is one of the biggest public safety buildings built by the city,” Mr. Hudak said, “and it’s giving me a very great sense of pride to help drive our services better in so many levels and ways.”