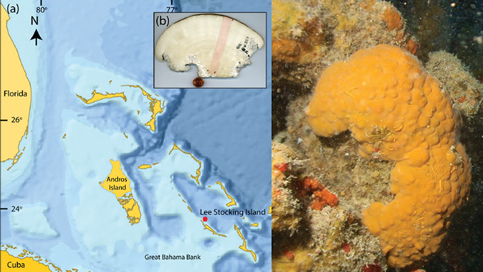 An elusive 600-year-old marine animal is giving scientists at University of Miami’s Rosenstiel School of Marine and Atmospheric Science deeper insights into historical weather patterns – information that may help them better project how conditions may change in the future, said Peter K Swart, a professor of marine geosciences at Rosenstiel School.

A research paper detailing their findings was published in the December issue of the American Geophysical Union’s journal, Geophysical Research Letters.

The organism in question is a sclerosponge – a round marine animal ranging in size from a grapefruit to a basketball, said Dr. Swart, the study’s senior author. Sclerosponges are slow-growing organisms whose hard limestone skeletons store records of upper ocean temperature and climate conditions, revealing past volcanic activity as well as the current global warming trend from the release of carbon dioxide and other heat-trapping gases into Earth’s atmosphere and absorbed by the oceans.

Corals have been used for this purpose, Dr. Swart said, but for a number of reasons they are not ideal. “Their signals are not as clear,” he said. “They grow in the upper 20 meters of the ocean, and they are not very long-lived.
“Sclerosponges, on the other hand, grow over a range of depth of 20 to 150 meters, so changes in thermal climate and signals are much clearer than in coral. And they can live 1,000 or even 2,000 years, so the dates extend further back in time.”

But sclerosponges are very hard to find.

“They grow in cryptic environments such as in caves and on vertical walls, in areas deeper than people dive,” Dr. Swart said. “So they’re usually found by accident. And the equipment required to collect them is very expensive. It’s hard to get funding for something so speculative.”

Dr. Swart collected the 600-year-old specimen used for this study via submersible at a depth of 133 meters below the surface in Exuma Sound, The Bahamas, in 1993. The samples were dated by scientists at GEOMAR Helmholtz-Zentrum für Ozeanforschung Kiel in Germany using uranium-thorium dating, which has an error margin of plus or minus five years.

“So this specimen records ocean temperatures from the late 14th century to 1993,” Dr. Swart said.

According to the study’s abstract, there’s a debate among climatologists about whether variability in ocean temperatures is internal to the ocean-atmosphere system or is forced by external factors such as volcanic or human activity. The temperature record from the sclerosponge’s skeleton indicates that external events play a major role.

“Previously the records we had of temperature changes in the ocean only stretched to 1850. This sponge allows us to go back to 1386,” Dr. Swart said.

The study shows that not only did oceanic temperature changes start increasing around 1850, consistent with global warming, he said, but the magnitude is about two degrees larger than previously recognized.

“Superimposed on this,” Dr. Swart said, “were variations in temperature in 20- to 50-year time periods. There were correlations for most in atmospheric forcing mainly due to human activity, but also episodes caused by volcanic activity.”

The study opens up the opportunities for more research.

“These are exciting little sponges with great potential for looking at changes in the climate. It would be interesting,” Dr. Swart said, “to see if the pattern we perceived in this sample correlates with other parts of the ocean – if, for example, they show evidence of other types of volcanic activity on climate.”

“Predicting and projecting future temperatures in the Atlantic can help us better prepare for hurricanes,” said the study’s lead author and Rosenstiel alumna Amanda J. Waite, “as well as fluctuations in summertime precipitation rates in Florida.”

Other contributors to the study, titled “Observational and model evidence for an important role for volcanic forcing driving Atlantic Multidecadal Variability over the last 600 years,” include Jeremy M. Klavans, Amy C. Clement and Lisa N. Murphy from the UM Rosenstiel School and Volker Liebetrau and Anton Eisenhauer from GEOMAR Helmholtz-Zentrum für Ozeanforschung Kiel.