Advertisement
The Newspaper for the Future of Miami
Connect with us:
Front Page » Top Stories » Miami International Boat Show sails off with chunk of city budget 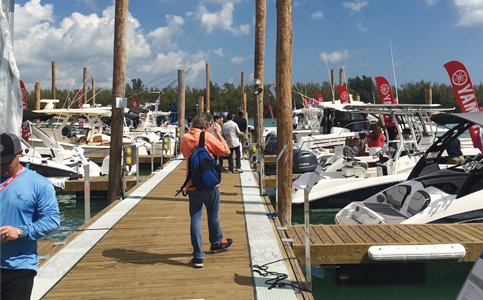 The Miami International Boat Show is leaving Virginia Key, along with the $1.2 million annual payment to the city, calculated and counted on as future revenue to help support a restored Miami Marine Stadium.

The departure of the boat show makes the fate of the stadium a further unknown, just as the city is nearing a call for bids on the multi-million-dollar restoration project.

Some city officials are suggesting the boat show’s goodbye is perhaps an opportunity to reevaluate the many proposed projects unfolding for the island, from stadium restoration to a maritime center, a boat ramp and parking area, flex park and marina and more.

The City of Miami owns most of the barrier island, along with the iconic and historic marine stadium, closed since Hurricane Andrew hit in 1992.

In November, the National Marine Manufacturers Association (NMMA) announced the 2021 boat show in Miami was cancelled, one of nine shows called off because of the Covid-19 pandemic.

In January, the association announced its departure from Virginia Key, with the 2022 show back to where it was for decades: the Miami Beach Convention Center.

A major renovation of the convention center begun about five years ago led NMMA to seek another venue, and a deal was made with the City of Miami to use the land and water surrounding marine stadium for the bulk of the annual boat show.

The boat show leaving the island was discussed at the January meeting of the city’s Virginia Key Advisory Board.
Board members bemoaned the city sinking so much money into the site.

City commissioners approved spending more than $20 million to create the so-called flex park – from a new hard surface to electric connections and acres of elaborate tents – with its first use being the 2016 boat show.

Board members voiced frustration over city taxpayers getting stuck paying for those infrastructure changes in order for the venue to host the boat show.

Board member Peter Ehrlich said the boat show’s departure will have a financial impact on the city, with the loss of more than $1 million a year for the license fee.

“And the city and the taxpayers are stuck paying $22 million for infrastructure improvements,” he said.
Those changes may be history now that the boat show is gone.

Civitas presented a variety of potential uses for the space during a community meeting in September 2018, showcased in separate site plans and renderings.

Ideas ranged from a carved-out swimming cove to a fitness hub, a festival street to a resilient green space and beyond.

Another board member said, “(the) elephant in the room is that the boat show not on Virginia Key upends everything … we need to rethink almost everything.”

David Snow, a city planner, said: “It’s probably a good time to look back at that plan from Civitas (for the flex park area) … the good news is that the plans were not predicated solely on the boat show.”

The overall plans for the area can serve to provide green space, which that area desperately needs, he said.

“As for events in general (at the site) this is an opportunity to rethink (plans and uses) and bring back and consider other things,” Mr. Snow said.

The boat show’s exclusive use of the land and water around the stadium for many months was a matter of concern for some city officials and residents, and members of the advisory board.

Some people lobbied to get the boat show off the island entirely, while others suggested reducing the amount of time the boat show closed off the site to the public. Some suggested holding the boat show in the fall instead of mid-February.

Esther Alonso-Luft, a board member who has a recreational business on the island under an agreement with the city, said the boat show’s departure may be welcomed by those who complained of its impact on the island, and on residents of Key Biscayne, connected to the mainland via the island and Rickenbacker Causeway.

“Lesson learned,” she said regarding the expense of improvements to host the boat show only to have it adversely impact the area.

“Virginia Key has significant factors that limit the size and kinds of events … there is only one way in and one way out, and very limited space – all problematic,” she said.

“The issue we need to address is how to make that area productive, for the city and its residents … to maximize and generate revenue.

“That island is a phenomenal space and we all know that,” Ms. Alonso-Luft said. “We need to refine it.”