Advertisement
The Newspaper for the Future of Miami
Connect with us:
Front Page » Arts & Culture » Estefan family get 12 more episodes on Facebook Watch 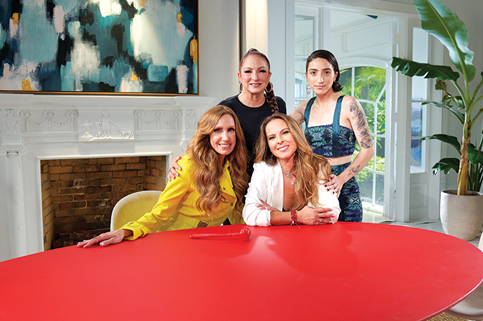 Facebook Watch has ordered 12 additional episodes of Red Table Talk: The Estefans after the series’ eight-episode Miami debut in October.

“They applied for the incentive program and received approval from the [Miami-Dade] County commissioners as long as they meet criteria and show proof because this is a performance-based program, which means production companies that apply will get the funds after the show is completed,” said Sandy Lighterman, the county’s film and entertainment commissioner.

Red Table Talk’s initial application was approved in July 2020 for the filming of the first eight episodes and the show’s executives have 300 days to submit the proper documentation for the incentive. Requirements include no less than 70% of county residents be hired as principal cast and crew members, excluding extras/background talent, and at least 70% of hired vendors and contractors must be Miami-Dade registered businesses.

According to the talk show’s film incentive program application submitted to the county in February 2020, the series had a budget of $5.56 million, with about $1 million expected to be spent locally, and it was to be 100% produced here.

“We look forward to continued exploration, growth and healing in our upcoming episodes and, with my red gavel, much more than the rhythm is gonna get you!” said Gloria Estefan, series host and executive producer, in a release announcing the new episodes that are being filmed in Miami.

The show’s programming will continue to highlight the three generations of women along with family, celebrity guests and experts. No topic is off-limits as the women bring their own opinions, life experiences and headline-generating topics to the red table and their communities.

The Estefans have highlighted topics that aren’t traditionally discussed in the Hispanic community, Ms. Pinkett Smith added in the release.